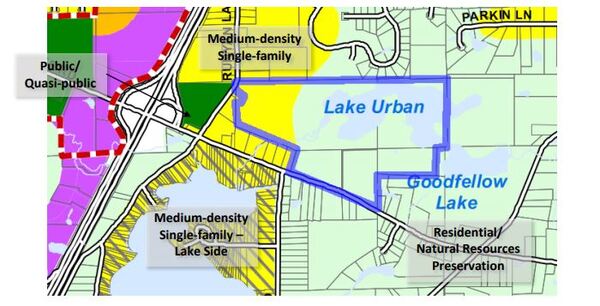 Plans for a potential residential development in Tyrone Township are being sent back to the Planning Commission for greater clarification.

The Lake Urban planned unit development would be located on 158 acres near the corner of Runyon Lake Road and White Lake Road in Tyrone Township. The applicant has spent much of 2021 trying to get preliminary PUD approval, bringing the project before the planning commission multiple times. Originally, they were seeking 122 homes, but that has since come down to 88, which falls at what would be the maximum amount allowed from a PUD when compared to the parallel plan.

The project has faced criticism from many in the surrounding area for traffic, density, and environmental reasons.

Before the Board of Trustee’s meeting, Tuesday, the township’s legal counsel explained the process and responsibility of the township to be reasonable and fair with property owners. The PUD was before the Board of Trustees with a recommendation for preliminary approval conditional upon a number of items from the planner. The Board of Trustees, however, felt the meeting of these conditions might have been too open ended and asked their attorney for an opinion. Their counsel suggested that it wasn’t definitive, and that if it doesn’t clearly say what is being recommended, then that leaves the Township Board kind of left in the dark as to what they are reviewing in terms of a recommendation.

The applicant argued that many of the conditions set were required for final PUD approval, and not the preliminary approval he was seeking. Supervisor Mike Cunningham got Zoning Administrator Ross Nicholson on the phone to try and get clarification. Nicholson felt the planning commission had vetted the items, but the Board was seeking more concrete clarification. They ultimately voted to send in back to the planning commission for this clarification and a new recommendation.