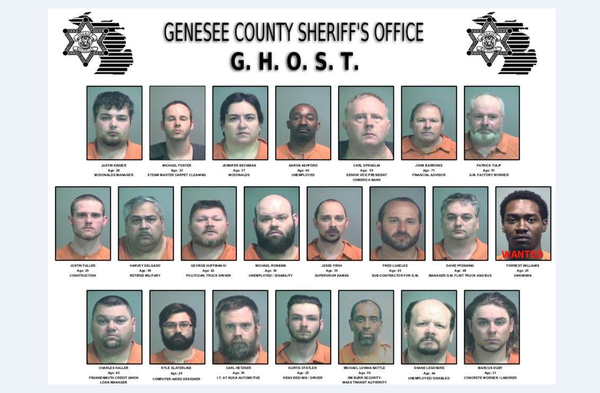 Genesee County Sheriff Robert Pickell announced the arrests Sunday and says they were believed to be targeting children for sexual purposes in Genesee County. He says some live in the county and others are from Saginaw, Shiawassee, Oakland, Wayne, Lapeer and Tuscola counties. One of the suspects named is Carl Spradlin, who is a senior vice president at Comerica Bank.

Pickell wrote in a Facebook post about the arrests that the investigation is "a sobering reminder that we must be more vigilant than ever protecting our children." The investigation involved the newly formed Genesee Human Oppression Strike Team, or GHOST. Pickell says the team also arrested a person suspected of sexually assaulting a 2-year-old and another accused of sexually assaulting a 6-year-old. Three Human Trafficking felony charges are also pending.