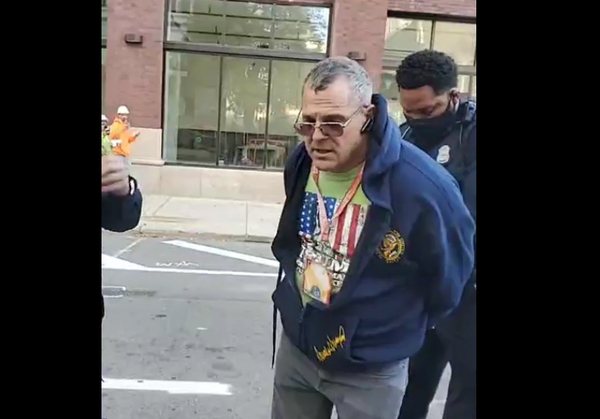 
A well-known local political activist was arrested today by Detroit Police as he attempted to attend a protest at the TCF Center.

Rob Cortis was the one-time owner of the Barnstormer Banquet Center in Green Oak Township, but is far better known as the owner of the Trump Unity Bridge, a 30-foot trailer festooned with Trump memorabilia that has become a fixture at campaign events for the past four years. Earlier today, however, Detroit Police impounded the vehicle and arrested Cortis.

Officials say they had warned Cortis on Wednesday that the vehicle did not have a proper license plate and not to return until he did. However, when he showed up with the bridge today at a protest outside the TCF Center, he was pulled over and arrested on an outstanding warrant from Canton for a charge of disturbing the peace.

According to WWJ Reporter Vickie Thomas, who first reported the story, after Cortis was arrested, people at the protest began collecting money to bail him out. Detroit Police Chief James Craig told reporters that the suggestion Cortis was arrested because he supports Donald Trump was a "false narrative.”