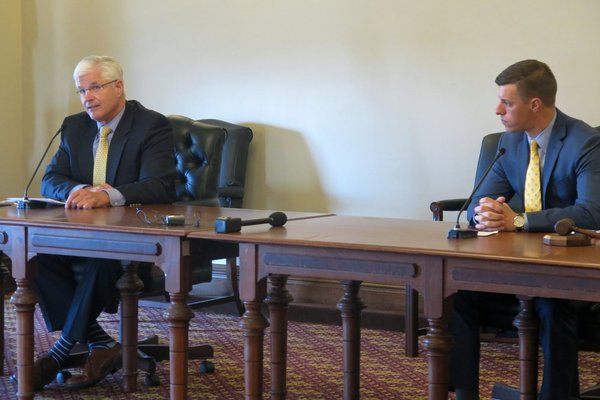 
Republican leaders of the Michigan House and Senate are expected to meet with President Donald Trump at the White House today, drawing words of caution from Michigan Democrats.

House Speaker Lee Chatfield of Levering and Senate Majority Leader Mike Shirkey of Clarklake, will meet with Trump today. Trump and his Republican allies are trying to stop the formal certification of results in several states, including Michigan, mostly through a continued series of baseless attacks on the integrity of the election and unsubstantiated claims of fraud.

The Associated Press reports that even before the election, Trump’s campaign was already considering asking some of the 29 state legislatures with Republican majorities, in charge of a total of 300 electoral votes, to depart from current practice in choosing their Electoral College delegates. The request would be for those bodies to select Trump electors and order them to cast their ballots for the president, regardless of the candidate the states’ voters actually preferred.

Governor Gretchen Whitmer held a press conference Wednesday and commented on Shirkey and Chatfield’s trip, the prospect of ignoring the popular vote and awarding the electoral vote to Trump. The Governor said she didn’t know the nature of the conversations Shirkey and Chatfield intend to have but hopes they wear masks and stay safe. Whitmer added, "All the meetings in the world, though, can't take away from the fact that Joe Biden won Michigan by over 150,000 votes. That's 14 times the margin that Donald Trump won by in 2016. ... So we will be sending a slate of electors that reflects the will of the people of Michigan at the end of this process."

Meanwhile, 8th District Democrat Elissa Slotkin has also reacted to the Oval Office meeting; tweeting Thursday that, “History has come for Speaker Chatfield and Senator Shirkey” and that “These two men will soon have to choose between our democracy, and fealty to one man.” She then concluded by saying “Gentlemen, this may be the thing you are remembered for. Please defend our democracy.”

History has come for Speaker Chatfield and Senator Shirkey, who have been summoned to the White House, ahead of Monday’s State Board of Canvassers' meeting meant to certify Michigan’s results.

These two men will soon have to choose between our democracy, and fealty to one man.

For their part Shirkey and Chatfield have previously said that the winner of the popular vote in Michigan will receive the state's 16 electoral votes, although they have been vague as to exactly what that means. Shirkey told The Detroit News he doesn't expect the results of the state's presidential race to change as lawmakers examine the voting process, but didn’t close the door to that possibility. And while Chatfield acknowledged Wednesday that Biden has more votes than Trump in Michigan and expected the President would eventually concede, he added that until he does, it was his “job is to investigate reports of fraud and reports of irregularities,"

Biden won Michigan 51% - 48%. All 83 counties across the state have now approved their election results, which will be considered by the State Board of Canvassers on Monday.