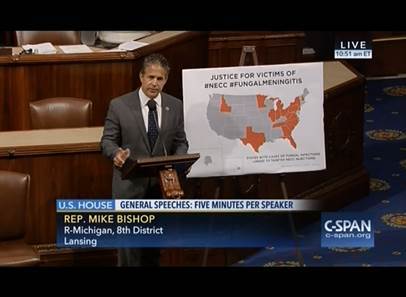 A Michigan congressman is weighing in on the upcoming summit meeting between US President Donald Trump and North Korean dictator Kim Jong Un. Congressman Mike Bishop represents Michigan’s Eighth Congressional District, which includes Livingston County. After a roundtable discussion involving area manufacturing officials in Howell last week, Bishop told WHMI that the coming summit meeting is an important step in reducing tensions between the United States and North Korea and its neighbors, such as South Korea and Japan.

According to Bloomberg, President Trump expects his historic meeting with the North Korean leader will take place “over the next three or four weeks.” On Saturday,Trump told a rally in Washington Township, Michigan that, in his words, “Strength is going to keep us out of nuclear war, not get us in,” Earlier, he said details of the summit are being ironed out, and that he’d spoken with the leaders of South Korea and Japan about preparations for the meeting.

He said the call Saturday with South Korean President Moon Jae-in was “a long and very good talk.” On Friday, Trump said that the potential location of a meeting with the North Korean leader had been narrowed down to two or three locations that he didn’t specify. The president said earlier he feels Kim Jong Un is completely serious and not trying to fool the rest of the world with his pronouncements about wanting to de-nuclearize the Korean Peninsula. (TT)