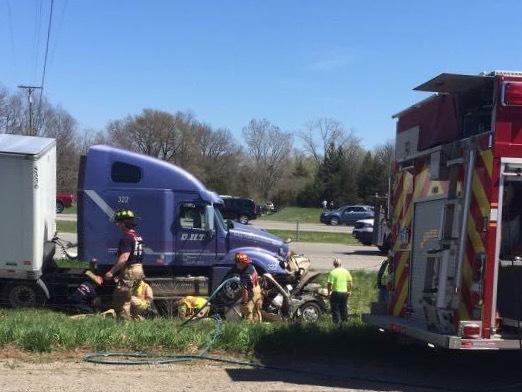 The driver of a semi-tractor trailer whose vehicle crashed and killed three people on US-23 in Green Oak Township has withdrawn his plea.

63-year-old Gary Bryce Erard had earlier pleaded no contest to three misdemeanor counts of moving violation causing death. But in court on Thursday, he withdrew that plea after hearing that Judge Suzanne Geddis would sentence him to six months in jail and two years of probation. His plea deal had called for 30 days in jail and at least six months of probation. Defendants can withdraw their plea if a judge exceeds plea terms. Jury selection for a trial is now set to start July 13th.

Erard was charged as a result of the April 2017 incident on southbound US-23, south of Lee Road, which involved multiple vehicles and ended in three fatalities. Green Oak Township Police say Erard failed to stop as he approached other vehicles stopped in a construction zone, striking six of them. One of the vehicles, a 1997 Ford Escort, was completely destroyed in the crash after the truck rolled over on top of it.

The driver of the Escort, 51-year-old Robin Brown of Milford, was pronounced dead at the scene. His 25-year-old fiancé, Sarah Miller of Milford, later died from her injuries at the University of Michigan Hospital where she was taken after being removed from the wreckage by members of the Green Oak Township Fire Department. 52-year-old Roby Steele of Davison, who was driving a 2016 Chevy Sonic that was also hit by the semi, was also pronounced dead at the scene after being removed from his vehicle. Erard remains free on bond. (JK)