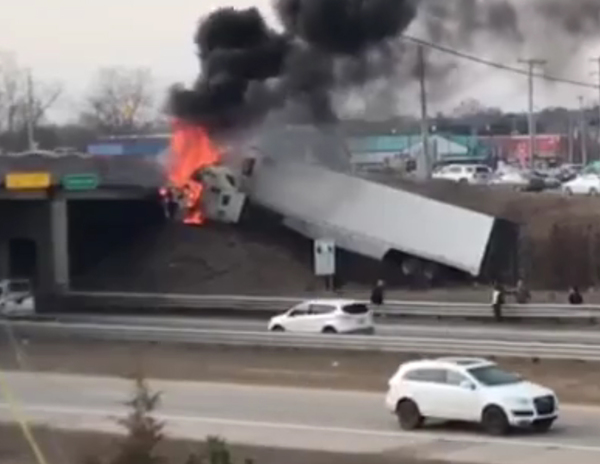 Southbound US-23 in the Fenton area was closed for more than two hours Thursday after a semi-tractor trailer crashed into the bridge at Owen Road.

The crash happened just after 1:30pm with the semi veering up the embankment, hitting the bridge and then catching on fire. Fenton Police say the truck’s driver suffered just minor injuries. No other vehicles were involved. Police were able to reopen the southbound lanes of US-23 by about 3:30, but remained on the scene for several hours to investigate the cause of the crash.

Michigan Department of Transportation Spokeswoman Jocelyn Hall said a crew was able to determine that the bridge did not suffer any structural damage. While no immediate repairs were needed, a more thorough inspection is planned today. (JK)
(Photo courtesy of WJRT-TV 12/Michelle Hodges-Ketterer)