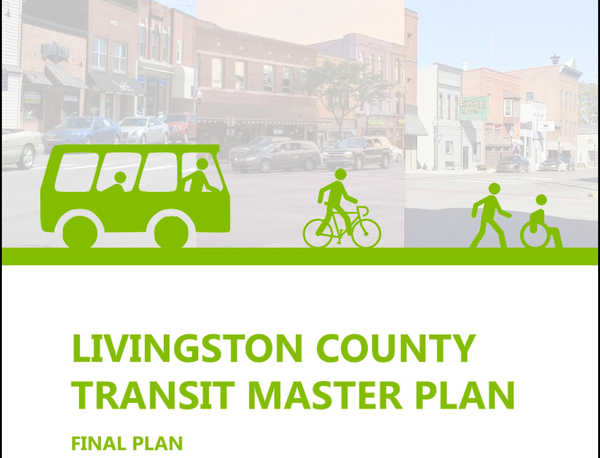 The Livingston County Transportation Coalition is asking the county's Board of Commissioners to support the recently-adopted Transit Master Plan's full implementation, not just aspects that are considered the "low-hanging fruit".

There are four major goals outlined in the plan; to improve system efficiency of current service for existing and new customers, develop new services to expand the customer base and respond to unserved needs, provide regional connections, and collaborate across communities, agencies and sectors for multi-modal transportation. Greg Kellogg, Director for the Livingston Essential Transportation Service (LETS), previously informed officials that some parts of the plan are already being implemented, like purchasing two new 13-passenger transit vans and testing dial-a-ride service on Sundays. Kellogg referred to these items as “low-hanging fruit” because they are somewhat easier to put into action immediately or may not require certain approval processes.

The plan was accepted by commissioners earlier this month; however the Transportation Coalition, which had a major role in the plan’s development, is asking the Board of Commissioners to go a step further and endorse full implementation of the plan. That could include plan goals like connections to biking and walking trails, a bus route along Grand River Avenue, and commuter service to Ann Arbor.

Dr. Leo Hanifin, Chairperson of the Transportation Coalition, spoke on behalf of the organization at the Board’s Tuesday meeting, stating that there are numerous people across the county that are impacted by a lack of local transit options. Hanifin says, "There's 900 households without a vehicle. 6% of the county is in poverty and 21% is designated ALICE (Asset Limited, Income Constrained, Employed). They have a hard time maintaining a reliable vehicle to get to work because 21% are working but not able to sustain reasonable livelihood. Three-quarters of our residents work outside of the county. They want options. They don't want to sit in traffic. They might rather sit on a luxury bus."


Hanifin feels commissioners could endorse full implementation while avoiding a “political landmine” because of the plan’s many options adding, "...all of the recommendations have benefit to significant slices of our community." Haninfin also noted that the coalition is “enormously diverse” and fully behind the final plan, adding that the funds for additional support are modest compared to the benefits of complete implementation.

Hanifin's comments, along with other coalition members and supporters, were presented during the Board of Commissioners’ call to the public, meaning that commissioners could not respond at that time. (DK)