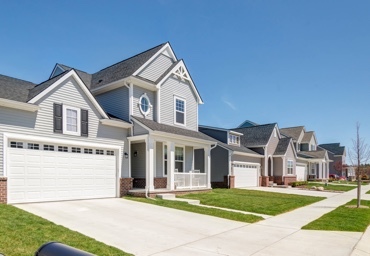 The Brighton Planning Commission has given preliminary approval to an 85-unit townhouse development at Flint Road and Temple Street.

City Community Development Director Mike Caruso told planning commissioners at their meeting Monday night that the development is a desirable one for the city because it is within walking distance from downtown Brighton, and the city’s Comprehensive Master Plan lists proximity to downtown as a desirable element of any new housing.

The property is owned by John Conely and the development company is Robertson Brothers of Bloomfield Hills. consists of several low-income mobile homes and a large vacant lot that at one time was the home of the Hyne family, one of the early pioneer families in the Brighton area. Conely says it took him about eight years to individually acquire enough adjacent property to accumulate the 5.5 acres in order to make a large development.

Conely says the Hyne home in recent years suffered serious deterioration and the decision was made to demolish it because of the prohibitive expense of renovation. Robertson at one time proposed a residential development in Brighton on the old Lindbom School property but had to abandon the idea because of the presence of the toxic chemical trichloroethylene, or TCE, under the surface, stemming from a former industry nearby. Robertson representative Tim Loughrin tells WHMI what the Flint Road development will consist of.

The townhouses will go on the market in the low-to-mid $200,000 price range. Loughrin says the project represents a company investment of $20 million. Planning Commission Chair Matt Smith says the developer will have to come back to the Planning Commission a second time for final PUD site plan approval.

If given, it would go to the City Council for another public hearing and a final determination. Loughrin says the units will be built as they are sold and not all at once. He hopes to have groundbreaking later this year and the first units completed a year afterward. (TT)