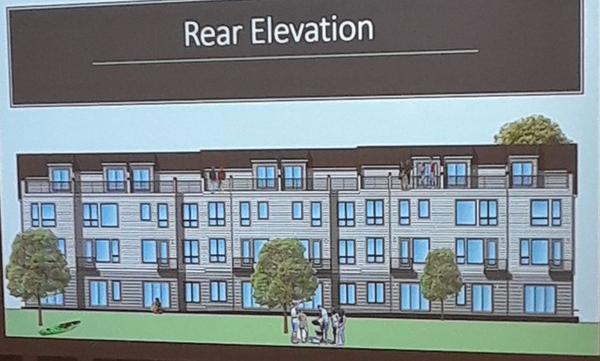 “Uptown on First” will be located at the corner of Chestnut and First Street, near the 53rd District Court building, and will consist of eight townhouses. Because the development qualifies under the City’s new R-5 zoning, project plans only required approval from the Planning Commission. Commissioners voted Monday to approve the site plan with two waivers, one for front yard parking and one for landscaping.

When presenting plans to the Planning Commission, Mike Noles of engineering group Diffin-Umlor and Associates, called the project a “transitional type of development”, suggesting that the townhouses would be suitable for both millennials and empty-nesters. There will be three different types of attached townhouse units, including a two-car garage, and rooftop deck view of Downtown Brighton and the Mill Pond. Noles estimates the units will cost around $500,000 to $600,000.

Construction work will include replacing an old water main, relocating overhead power lines, and demolishing an apartment building on one of the parcels where the development will be located. The adjacent lot is vacant. A three-way stop is also being considered for the intersection of Chestnut and First Street. The project’s developer is Schafer Construction Co. of Brighton, the builders will be from The Innovant Group, and architectural work will be conducted by Neeper Architecture. Project leaders expect to break ground in August and, with two months for site improvements, believe the development will be fully built within a year.

The project received praise from the City’s Planning Commission. Chairperson Matt Smith liked the concept and idea, calling it “unique”, while Commissioner Steve Monet said it was a “wonderful project”. (DK)