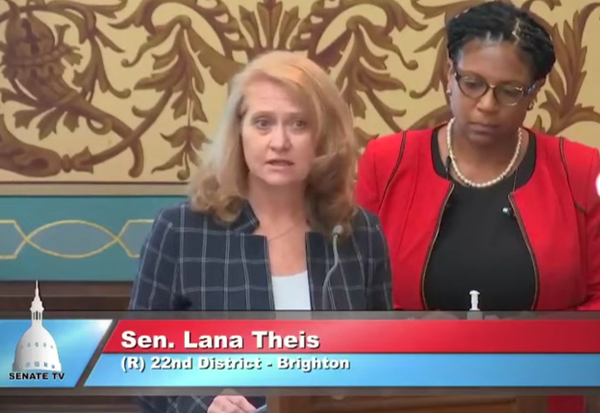 
The state Senate on Thursday adopted, with full bipartisan support, a resolution condemning and denouncing violent activities of extremist organizations and urging the federal government to combat the spread of domestic terrorism.

Brighton Township Republican Lana Theis co-sponsored the measure with her Democratic colleague from Detroit, Sen. Sylvia Santana, who joined her at the rostrum to introduce the resolution. Theis said they stood “together, joined as Michiganders and Americans, united for peace and understanding. What happened to George Floyd was horrific, unconscionable, indefensible and pure evil. We all are shocked and saddened by what we saw and have been spurred to action."

Sen. Santana said that as a Detroiter, she was, "upset at those individuals who come to Detroit with the goal of antagonizing our police and encouraging violence. Once these individuals have accomplished their goals, they go back to their communities where that type of behavior is not tolerated. We have worked hard to rebuild our city, invested millions of dollars; members of this chamber voted to support the resurgence of Detroit on several occasions. This resolution is about condemning the action of those who seek to destroy all the work that has been done"

The resolution says that extremist organizations, “including Antifa and White supremacist groups such as Boogaloo, and others, have traded civil protest for violence on multiple occasions” and “have participated in attacks on civilians, members of the press, law enforcement, and our men and women in uniform. Their violence detracts from peaceful gatherings, endangering individuals using civil protest as a means of expression.”