Theis Names Brighton Man As Veteran Of The Year 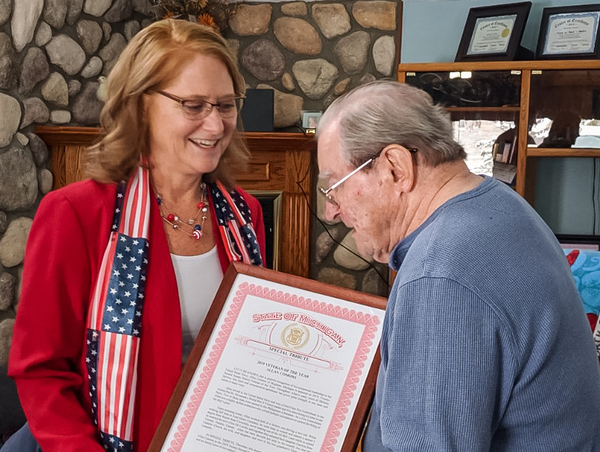 A local lawmaker has honored an area veteran for his service.

State Sen. Lana Theis today announced the recipient of her Veteran of the Year tribute, Allan Comons, of Brighton. Theis presented Comons with the special tribute at his home on Veterans Day. “It is my honor to recognize Allan Comons as the 22nd Senate District’s Veteran of the Year. Allan faithfully served our country and continues to demonstrate his dedication to his family and our community. We all are grateful for his service and sacrifice, and for that of all veterans who helped defend liberty and our way of life.”

Comons is a U.S. Navy veteran who served during World War II as a fire controlman first class while serving in the Pacific. This highly skilled and technical rate helped solve ballistic calculations to control the firing of ships’ guns. He was the recipient of the World War II Victory Medal and earned five service stars during his naval career, two of which were earned during the liberation of the Philippines.

After his Navy service, Comons worked for Ford Motor Company and earned a master’s degree from Wayne State University. He was a dedicated husband to his wife, Lucille, who passed away earlier in the year, father to their adopted daughter, Carolyn, and grandfather to two grandsons. Comons is also a devoted member of the Catholic Church. (JK)