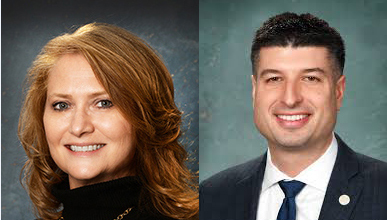 
Republican State Senators Lana Theis of Brighton Township and Tom Barrett of Charlotte have requested that Secretary of State Jocelyn Benson, a Democrat, perform an audit of the Nov. 3 election prior to certification of results.

In a hand-delivered letter, Theis and Barrett cite “hundreds of sworn affidavits claiming numerous allegations of voter fraud and irregularities throughout the state.” The senators say there are four main reasons they believe an audit is needed, including a software glitch in Antrim County and numerous allegations arising from the absentee ballot count at TCF Center in Detroit. Elections officials have already either denied the allegations or explained them as human errors that were accounted for. In the case of the Antrim County incident, approximately 6,000 votes for Donald Trump were incorrectly credited to Joe Biden, making it appear he had won in the Republican-leaning county. The county quickly corrected the issue after it was learned the clerk had forgotten to update the software that pulled the results from the tabulator and onto the county's online system. However, it has become a prominent issue in Republican claims that massive voter fraud occurred across the state, of which there is no evidence to support. Instead, the issues have been shown to be mostly human error and/or misunderstandings of election law that would only affect a small number of ballots and not nearly enough to overturn the election results.

Despite that, Theis and Barrett say the claims “deserve our full attention and diligent investigation to ensure fairness and transparency in our election process.” Benson's office acknowledged receipt of the letter, but made no commitment to conduct an audit prior to the Board of State Canvassers meeting on November 23rd in which they will vote whether or not to certify the state’s results, which show Biden with a 145,000 vote win.

However, Benson spokeswoman Tracy Wimmer noted that the vote canvass currently underway in counties across the state is itself an audit. In addition, it is normal procedure for a secretary of state to conduct an audit of an election, although that is normally done after the results have been certified.

A copy of their letter is available below.