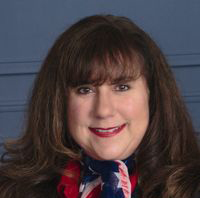 
The person being put forward by the Chair of the Livingston County Board of Commissioners as a politically reliable ally on a regional parks board is also among state Republican Party officials who, without evidence, continue to allege mass election fraud in Michigan.

Carlone was named by County Board Chair Wes Nakagiri as his favored replacement for the Huron-Clinton Metroparks Authority board – despite having only recently moved to the county, missing the application deadline, and having no parks and recreation experience.

The Bridge Magazine reports that Carlone is also among those lobbying the GOP-led Legislature for an audit similar to what’s taking place in Arizona, where Trump’s false claims the election was “rigged” compelled the state Senate to order an audit that experts have likened to a partisan circus. Carlone’s email said while it will take a “bit of time and a bit of money…this is what worked in AZ!” She then added “Letting Dems run our state and nation will cost us way more time and money!”

Post-election audits in Michigan and elsewhere across the country have turned up zero evidence of systemic voter fraud and determined the election was fair and secure. Republicans appear divided on the audit issue. Michigan GOP Director Jason Roe has said the party is focusing on the 2022 election instead of an audit. He previously commented that Trump blew the election and it was not stolen, causing some Trump proponents to call on him to resign.

Carlone, meanwhile, has yet to be appointed to serve as Livingston County’s representative on the Huron Clinton Metroparks Authority Board after county commissioners voted 5-3 against reappointing former commissioner Steve Williams, who was seeking a new term on the authority board but was targeted by Nakagiri because was not openly hostile to the Metroparks Diversity, Equity and Inclusion plan, which Nakagiri has attacked as “anti-white” “racial propaganda.”

Before commissioners could vote to approve her as his replacement, questions were raised as to whether she was even eligible as her application had been received past the deadline. The issue is expected to be raised again on Wednesday morning during the county’s Personnel Committee meeting.