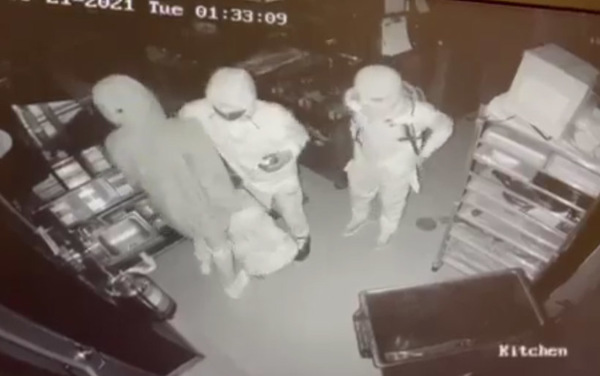 
Three suspects are being sought for the break-in earlier this week of a Lyon Township firearms dealer.

The Oakland County Sheriff’s Office says deputies were alerted to the break-in at Huron Valley Guns, located at 56477 Grand River Ave., at about 1:35 Tuesday morning by an alarm company that monitors the retail store. Deputies arrived to find a broken window on a roll-up garage door that provides access to the dining area of the business. A concrete block had been thrown through the window.

Surveillance video revealed the suspects arrived at the store at 1:23am in a gray Jeep that had no license plate. A passenger who was wearing a blue jacket, mask and gloves left the vehicle, checked to see if the front door of the building was locked, and returned to the Jeep. The Jeep was then driven across the lawn and backed up to the garage door at the rear of the building.

The three suspects – two dressed in blue jackets and the third wearing a black jacket and all wearing masks and gloves – entered the building after one of them broke a window with the concrete block. The suspects moved through the dining area and tried to enter the store showroom but were unable to break the entry door window. They quickly left the building and drove away. The business owner checked the building and reported that nothing was taken.

Oakland County Sheriff Mike Bouchard urged the public to contact the Sheriff’s Office or local police if they have any information about the break-in, saying that instances such as Tuesday’s break-in invariably result in more serious crimes. “Obviously, individuals that are organized and breaking into a firearms store have very bad intentions of how those weapons ultimately will be used,” Bouchard said. “These are precisely the kinds of guns that end up being involved in crimes, including homicides. We really need the public’s help to catch these individuals before they are successful in another attempt.”

Anyone with information about the break-in should call Detective Jared Rutkowski at 248-437-5600 or call Crime Stoppers at 1-800-SPEAK-UP. A reward of up to $1,000 is offered for information leading to an arrest.