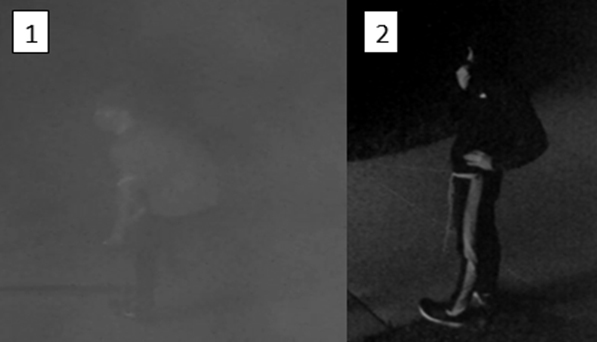 
Three teenage suspects are being sought by police after a local elementary school was vandalized last month.

Milford Police said Johnson Elementary School on General Motors Road sustained between $30,000 and $40,000 in damage in the early morning hours of August 29th. According to a release from the department, including surveillance camera pictures, the three white males are believed to be between 14 and 16 years old and caused the damage between 12:30 and 1:30 that morning.

While the surveillance photos are dark and grainy, police say the first suspect was wearing a dark-colored T-shirt with a light-colored color and sleeves, a backward baseball cap, and dark-colored pants. A second suspect was wearing athletic pants with a stripe down the side and a long drawstring. He also had a North Face or Adidas hoodie with the hood up. However, police don’t believe he took part in the vandalism. The third suspect is seen wearing a ski cap with a pom-pom at the top, glasses with dark frames, and Air Jordan 11 shoes.

All three were believed to be on foot. Milford Police took fingerprints from the crime scene, which are being analyzed by the Oakland County Crime Lab. Anyone with information about the vandalism is asked to call the Milford Police Department at 248-684-1815.