Suspects In Fenton Counterfeit Case Due Back In Court 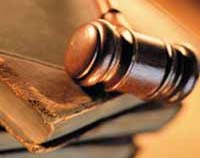 20-year-old Robert Taylor and 22-year-old Eddie Simmons, both residents of Jackson, were charged in Genesee County’s 67th District Court with multiple counts of passing counterfeit $100 bills last month at various businesses in Fenton. Both are due back in court May 9th for a probable cause conference.

They were arrested following an investigation by Fenton Police April 24th after receiving reports that two adult males were passing counterfeit $100 bills in at least four different businesses on Silver Parkway. Several counterfeit bills were passed in exchange for gift cards. Other suspects may be involved, although that remains under investigation. If convicted, both Taylor and Simmons face at least five years in prison and/or a $2,500 fine. (JK)