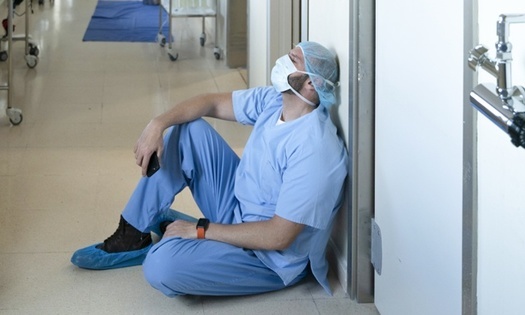 
While some elected officials and members of the public question the need for renewed restrictions announced on Sunday to combat COVID-19, hospital leaders in Michigan have made it clear that urgent action was needed to reduce the spread of the virus in the community.

The state reported another 7,458 cases of COVID-19 Tuesday, just a day before a new shutdown of businesses aimed at curbing the spread of the coronavirus. Meanwhile, several hospitals in Michigan, including in East Tawas, St. Joseph and Alma, report being at capacity while more than a dozen others are reporting over 90 percent capacity.

Wright Lassiter, CEO of Henry Ford Health Systems, said the patient surge is taking a toll on the healthcare workforce. "We've been in a battle for the last eight months, and when you're in a battle for that long, you lose a bit of energy, steam and resiliency."

Tina Freese-Decker, CEO of Spectrum Health, said COVID positivity rates have risen from 3% to 15%. "It's a much different situation than we had a couple of months ago. This is throughout the state, and we're not seeing the demographic disparity that we did see in the spring. It is infecting all populations."

John Fox, president and CEO of Beaumont Health, said their in-patient volume tripled in the past 30 days, which he noted is a lagging indicator. He urged Michiganders to practice the basic infection control tools: social distancing, frequent hand-washing and wearing a mask. "It's a difficult situation people do not appreciate. We see it out in the community, we see it in our own lobbies. People come in, we ask them to wear masks and we get resistance."

While the latest stats show St. Joseph Mercy Livingston Hospital in Howell is only at 15% capacity currently, officials warn that can change quickly. Ed Ness, president and CEO of Munson Health Care in Traverse City, says rural communities are now experiencing spikes in cases that were only happening in Detroit and other urban areas in the spring. "I think some of our rural communities felt that they're isolated, that they're protected," Ness remarked. "And our recent data has shown that it doesn't matter where you live we are facing the same situation. So, even in our rural communities, you have to be diligent."

As of Tuesday there were 3,320 patients hospitalized with COVID-19, more than three times the number just a month ago and that number that could climb to nearly 5,000 within the next few weeks.