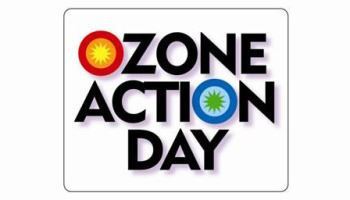 
The Southeast Michigan Council of Governments, known as SEMCOG, is asking people to avoid mowing their lawns over the next few days to keep ozone levels down.

Sunday is an Ozone Action Alert Day in Southeast Michigan. Ozone acts as a protective layer in the upper atmosphere, having been formed by the action of UV light and electrical discharges within the Earth’s atmosphere. Its highest concentration is high in the ozone layer of the stratosphere. Since it absorbs most of the Sun's UV radiation, it has a beneficial, protective effect on people, animals and plants. But at ground level, ozone has a negative effect, causing damage to mucous and respiratory tissues above concentrations of about 0.1 parts per million. Consequently, you’re asked to drive less during this period and either ride a bicycle or walk to your destination.

You’re also urged to delay mowing your lawn until evening or the next morning, as gasoline exhaust from lawnmowers and other lawn and garden equipment help form the noxious gas. You’re also asked to not fill your car’s gas tank during this period as the fumes contribute to ozone formation, and therefore, air pollution. Finally, you’re asked to reduce electricity use by turning the thermostat on your air conditioner up a couple of degrees. Included in the advisory are the Southeastern Michigan counties of Livingston, Oakland, Washtenaw, Wayne, Macomb, St. Clair and Monroe.