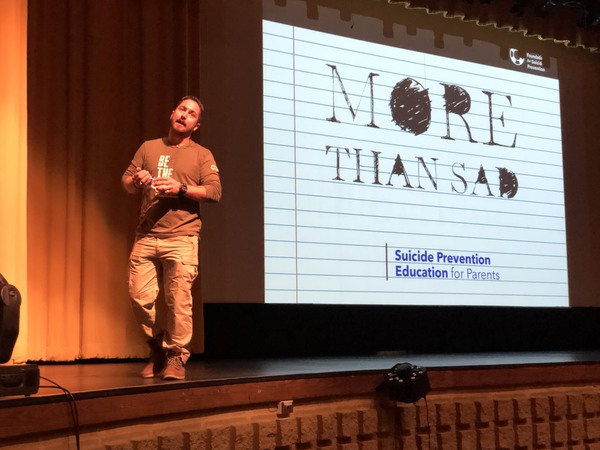 A special program was held for concerned parents on how they can help their children through depression and prevent a tragedy.

Roughly 150 people attended More Than Sad: Suicide Prevention for Parents at the Rod Bushy Performing Arts Center at Howell High School, Tuesday night. Steve Windham, the Michigan Director for the American Foundation for Suicide Prevention, delivered a 90-minute presentation on identifiers to be aware of in young people, and how to help steer those suffering from depression in the right direction. Windham said that while we know a lot about depression, anxiety, and mental illness, there is no easy formula for identifying it. He says that you have to be educated, vigilant, and aware of the signs and symptoms. Sometimes, the director said, mental health symptoms are often misinterpreted as normal adolescent things like mood swings, laziness, poor attitude, and immaturity.

Windham identified 3 warning signs under the categories, “talk,” “behavior,” and “mood.” For example, speaking about being a burden to others, killing oneself, or feeling trapped may signal imminent suicide risk. The increased use of drugs or alcohol, withdrawing from activities, and giving away prized possessions are just some examples of behavioral triggers. A person at-risk to themselves might also show one or more of moods like depression, rage, anxiety, and sudden unexplained unhappiness.

Windham said if these signs are recognized, it’s time to open up a caring conversation with your child and be direct. Asking “Have you considered suicide?” and not sugar coating it by that using that word, takes away its power. Talk to them in private, listen to their story, express concern, and reassure them that help is available. Windham says the next steps are to contact a mental health professional, do what you can to reduce stress triggers, and remove and secure all lethal means in your home.

The AFSP reports that 90% of people who die of suicide had diagnosable mental illness. Windham said that the stigma around mental health causes many people hide or cloak their feelings, and that that stigma needs to be shattered. Depression is a common problem, he notes, and that 2 out 3 teenagers suffering from it are not being treated. When help is asked for, treatment is effective for 8 out 10 people.

More complete information can be found on the Foundation’s website, at www.afsp.org.