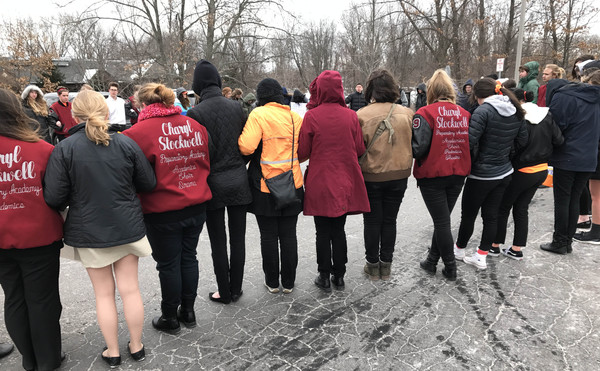 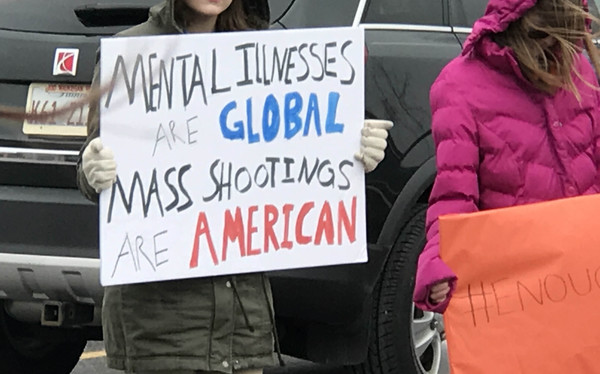 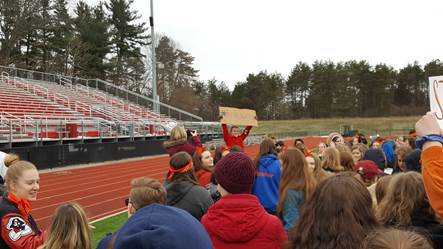 In Pinckney, approximately 200 students gathered on the high school football field (bottom pic), where according to Superintendent Rick Todd, their conduct was, "exemplary as they were respectful, attentive and showed an understanding and appreciation for what the message they are trying to convey. To be honest, their conduct and behavior today can be used as an example for many adults in this country who struggle to conduct themselves in this type of manner." He says another 250-300 at the middle school also took part.

Approximately 200 students took part in the walkout at Howell High School, gathering in front of the school and alternately chanting slogans and standing in silence. District spokesperson Tom Gould said the district did not support or oppose the walk out, but did have plans in place to ensure participating students would remain safe at all times. He also said that students were not sanctioned for taking part.

Brighton Area Schools Superintendent Greg Gray said they designated gymnasiums at each building as a safe and secure place for students to gather, adding that they also had a safety plan with supervision and emotional support for those who made the choice to participate.

Also in Brighton, more than 70 students and parents from the Charyl Stockwell Preparatory Academy walked into the school’s parking lot precisely at 10am, gathered into a circle and then read aloud the names of the 17 people murdered a month ago today at Marjory Stoneman Douglas High School in Parkland, Florida. They then stood in icy silence for 17 minutes in their memory. That was followed by an open floor for anyone to say what they thought. Dana Gray was one of the students who organized the CSPA walkout and was passionate as she addressed the group. "Enough is enough! If you are fed up by the lack of action by our legislators, like we and countless high schools and students around the country are, write your congresspeople, go to marches, make your voices heard. You may not be able to vote yet but that doesn't mean you have to dampen your voice."

Standing beside Gray was her mother Tanya, who beforehand told WHMI she was proud to see her daughter and students like her across the country step forward and make themselves heard. "I'm glad they're pushing adults to move the ball forward. We've been stuck for too long, there's been too many lives lost. This is unnecessary and has to be preventable. We are one of the greatest countries in the world and we should know how to fix this."

Both Gray and her mother mentioned that one of the issues that must be addressed immediately is the lack of scientific study on gun violence, referencing the 1996 Dickey Amendment which was lobbied for by the National Rifle Association and has essentially frozen any attempt by the Centers for Disease Control and Prevention to conduct any studies on gun violence.

Also speaking was CSPA parent Yvonne Mackel, a member of Moms Demand Action, an advocacy group seeking tighter controls on assault weapons. Mackel said she was proud of the students for making a stand and that they shouldn’t be deterred by the inaction of those in power. "I'm so sorry and heartbroken that we adults have failed to protect you from this burden that you now have to carry. But I have no doubt that change is coming. You all have the ability to be the leaders to make change happen."

Despite having a mandatory school uniform policy, many of the CSPA students were wearing orange, a color associated with the effort to curb youth gun violence. Others were also carrying signs, some of which read, “Fear Has No Place In Our Schools,” “Mental Illnesses Are Global, Mass Shootings Are American” and “Protect People, Not Guns.”

After more than half an hour in the below-freezing temperatures, the students filed back into school to finish their day, but most were determined that they were not finished speaking out on the topic. (JK)