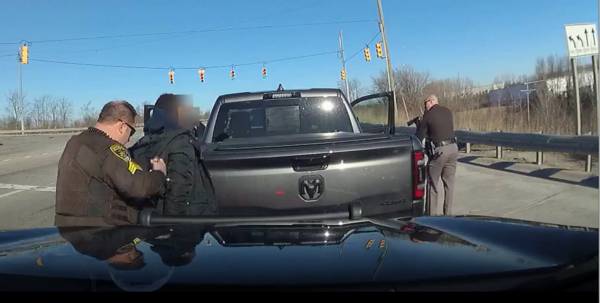 
A stolen vehicle was recovered by Livingston County Sheriff’s deputies over the weekend.

At approximately 2:15pm last Saturday, a deputy was on patrol on I-96 in Howell Township when he checked the registration on a 2023 Ram pickup. The license plate showed it was stolen out of the Detroit Police Department in December of 2022, along with a GMC Envoy.

As the deputy approached the vehicle to conduct a traffic stop, the Office says it abruptly exited I-96 onto Highland Road - where Deputies performed a high-risk traffic stop to take the two occupants into custody. The driver, a 26-year-old Detroit man, admitted to knowing the vehicle was stolen and was subsequently lodged for receiving and concealing a stolen motor vehicle.

The 2023 Ram pickup appears to have been stolen from a manufacturer’s lot in Sterling Heights on an unknown date.
It marked the fourth stolen vehicle recovered in a week in Livingston County.

A video of the traffic stop is available on the Sheriff's Office Facebook page. That link is provided.