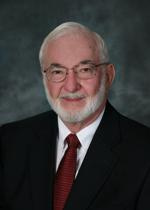 
Longtime Howell Mayor Pro-Tem Steve Manor is stepping down from the leadership role due to continuing health issues.

At the very end of Monday night’s Council meeting, a motion was approved to accept Manor’s resignation from the position, not his Council seat. He’s a retired Howell Public Schools teacher who was elected to the City Council in 1999.

Manor was appointed Mayor Pro-Tem in 2000 and is very active on various boards and committees, as well as in the community. His Council term expires in November of next year.

Manor told Council he appreciated having the opportunity to serve in the leadership role. He said the reason he feels the need to step back is because he is in a declining state of health. Manor commented that he’s been making decisions and choices about what he can and can’t do and how involved he wants to be, and he thought this move was a good start.

Mayor Bob Ellis and others expressed that they greatly appreciated all of Manor’s support.

A final motion was made to appoint Councilwoman Jan Lobur to take over the Mayor Pro-Tem role, which was approved unanimously.