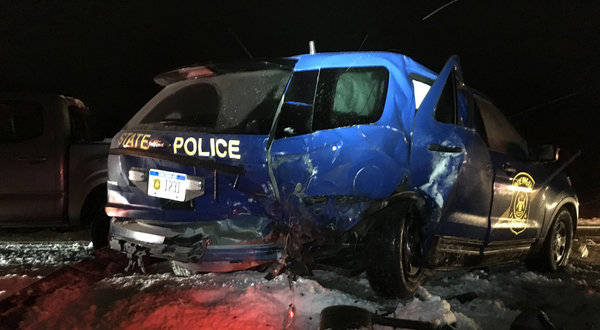 State police say there have been several car crashes involving troopers within recent months, prompting them to remind motorists they have to slow down and move over for emergency vehicles.

Since September, Michigan State Police Brighton Post troopers have had three close calls while policing traffic crashes. The most recent crash occurred on February 9th when a sergeant’s patrol vehicle was struck by a passing vehicle. The sergeant was assisting a motorist who was stuck in the median when a driver lost control and struck the sergeant’s patrol car.

In a similar situation in December, a driver failed to move over to the right lane and struck the patrol car, causing it to hit the trooper who was outside of his vehicle.

In September, a trooper from the Brighton Post was policing a traffic crash in Washtenaw County when a driver lost control on the wet pavement and struck the back of the patrol car. The patrol vehicles’ emergency lights were activated in all three situations.

Though no one was fatally injured in the crashes, Lt. Mario Gonzales, assistant Brighton Post commander, reminds residents it is a state law that requires drivers to move over when possible for emergency vehicles with their lights activated. If changing lanes is not a possibility, motorists must slow down and proceed with caution.

Gonzales says drivers involved in a crash in adverse weather conditions often blame the weather or the road condition. While both may be factors, Gonzales says, “…the responsibility for maintaining control of the vehicle in all situations lies solely with the driver.”