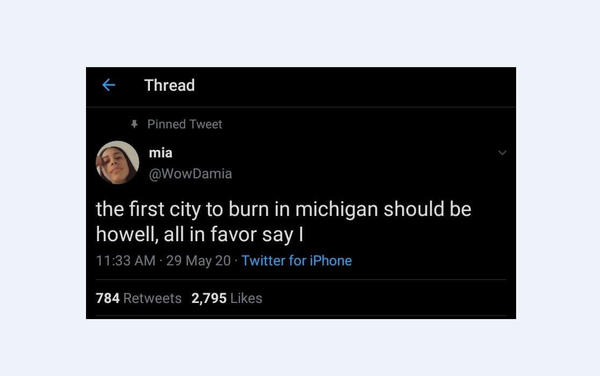 
A state employee will be suspended without pay after she tweeted that Howell should burn in the aftermath of George Floyd’s murder.

The woman, who is an employee of the Michigan Department of Health and Human Services, tweeted May 30th, “the first city to burn in michigan should be Howell, all in favor say I," from an account that has since been deleted. Lynn Sutfin, spokesperson for MDHHS, said the woman would serve a 10-day unpaid suspension and receive additional training once she returns to work. Sutfin said the employee also expressed regret for the tweet, which gained thousands of likes and dozens of comments detailing negative experiences in Howell and the community’s racist reputation. It also generated outrage from area residents disputing that reputation and saying the tweet was an incitement to violence.

Meanwhile, Howell Police continue to investigate the tweet for possible charges. A report requesting a count of making a terrorist threat, a 20 year felony, was sent to the Livingston County Prosecutor’s Office, but was returned for additional investigation. Livingston County Sheriff Mike Murphy had initially said the tweet was not a credible threat.