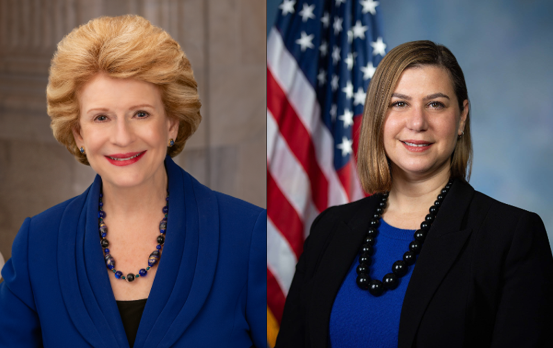 
Following the surprise announcement that Democratic U.S. Senator Debbie Stabenow won’t seek re-election, Livingston County’s Congresswoman is among the names being floated to potentially replace her.

Stabenow announced on Thursday that she will not run for a fifth term in 2024 - a surprise decision that sets up a scramble by both parties for an open seat in the key battleground state. The news shocked many Democrats in the state and her impending retirement turns Michigan’s next Senate race into one of the most competitive in the country as the party tries to preserve its slim majority.

Stabenow told The Associated Press that she made the decision to retire a few months ago – saying she knew that this was a moment when she could pass the torch to the next generation of leaders. Democrats will face a test to find a candidate with Stabenow's broad support. “We'll see how things develop,” the senator said, adding that she expects “to have a lot of discussions with people.”

Local Congresswoman Elissa Slotkin is among the Democrats whose names began circulating after Stabenow’s announcement. Slotkin was first elected in 2018 and then re-elected this past November to represent Michigan’s newly redrawn 7th Congressional District. It was deemed one of the country’s most competitive House districts.

Slotkin posted the following statement on Twitter but didn’t address a potential run:

“For almost 50 years, Debbie Stabenow has brought her tireless spirit and passion for Michigan to public service. As the first woman elected to represent our state in the U.S. Senate, she's been our mentor, our leader, and our trailblazer. And to me personally, she has been a friend, confidante, and invaluable sounding board. I spoke with Debbie this morning to thank her for everything she’s done for Michigan’s farmers, our manufacturers and small business owners, and our children. Her record of accomplishment is simply unmatched, and her voice will be sorely missed in the Congress”.

“U.S. Sen. Debbie Stabenow has been one of the hardest-working, smartest senators Michigan has ever had. For more than two decades, she has fought for Michigan residents all over our state, whether they worked in the auto industry or agriculture, whether they were children or senior citizens or military veterans. She has protected the Great Lakes, fought for our health care and our education, and blazed trails for women ever since she ran for Ingham County Commissioner at the age of 24. She has certainly earned her time off, but we will miss her commitment, her grace under pressure, and her unwavering support for Michigan values”.

While the current political climate in Michigan favors Democrats following a midterm election where they flipped the state House and Senate, the state is still expected to be one of the nation’s premier battlegrounds in the 2024 presidential election. Only one Michigan Republican has held a seat in the Senate in the past 40 years.

Names of other Democrats circulating include Pete Buttigieg, the federal transportation secretary who ran for president in 2020 and moved from Indiana to northern Michigan last year to be closer to his husband’s family; and state Sen. Mallory McMorrow, who has seen her profile rise since going viral with a speech denouncing Republicans over “grooming” accusations.
Buttigieg said in a statement that he was “fully focused" on his Cabinet post and was "not seeking any other job.”

Democratic Governor Gretchen Whitmer, who has been mentioned as a possible future White House candidate and was just sworn in Sunday for a second term, issued a statement in which she ruled out a potential Senate run and re-affirmed that she would stay in office for the next four years.

On the GOP side, the National Republican Senatorial Committee, which works to elect Republicans, said in a statement after Stabenow’s announcement that it would “aggressively target this seat in 2024.”

Republican names that have surfaced include John James, who was elected to Congress in November after losing Senate races to Stabenow in 2018 and Democrat Gary Peters in 2020; Tom Barrett, a former state representative defeated by Slotkin last year; and former Rep. Fred Upton, the longest-serving member of the congressional delegation before he decided not to run in 2022 after voting to impeach then-President Donald Trump over the Capitol riot. Republican Tudor Dixon, who lost to Whitmer in 2022, is not ruling out a run for Senate, according to spokeswoman Sara Broadwater.

Stabenow joined Congress in 1996 after serving in the Michigan Legislature. In 2000, she made history by becoming the first woman to be elected senator in Michigan, defeating one-term Republican Sen. Spence Abraham. She turned back GOP challenges in 2006 and 2012 and defeated James by 6.5 percentage points in her last election in 2018.

Stabenow is the longest-serving member of the state’s congressional delegation. She is chair of the Democratic Policy and Communications Committee, making her the No. 3 ranking party leader, and heads the Senate Agriculture, Nutrition and Forestry Committee. Stabenow most recently has been involved in bipartisan legislation aimed at increasing oversight of cryptocurrencies. She has also led efforts to expand and increase funding for mental health care both nationally and in Michigan.