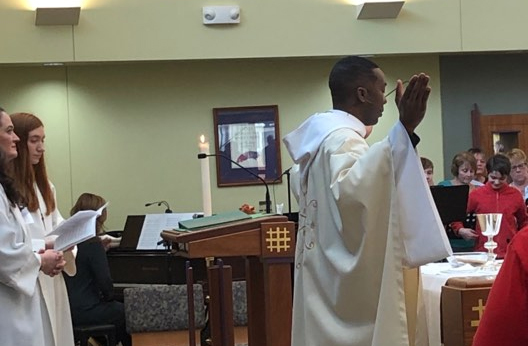 A longtime Brighton clergyman who has a passion for "social justice and inclusion" held his final service before leaving to lead an out-of-state diocese.

The Rev. Deon Johnson, rector at St. Paul's Episcopal Church in Brighton, was elected in November to become the new leader of the Episcopal Diocese of Missouri. It has more than 11,000 parishioners and covers the eastern half of that state. Johnson is a native of Barbados who immigrated to the United States at age 14. He will be the first openly gay leader of the diocese.

On Sunday he held his final service at St. Paul’s after 14 years leading the parish, telling parishioners he has been inspired by them in many ways as they have, “loved and laughed, cried and celebrated, prayed and partied” through the years.

Johnson previously told WHMI that he will go to Missouri with no agenda other than to serve the needs of that community as he did in Brighton. Johnson will replace Bishop George Wayne Smith as the 11th leader of the Episcopal Diocese of Missouri in its 180-year history. As to Johnson’s replacement, a meeting will be held February 18th at the church with Bishop Bonnie Perry to, “answer questions and begin a conversation in discerning next steps in clergy leadership at St. Paul’s.” (JK)