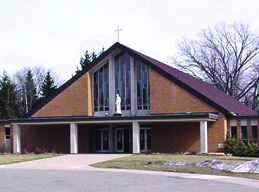 By Jessica Mathews/News@whmi.com
A local church is reminding the community that their food pantry remains open on weekends to serve those in need, although the process has changed.

St. Joseph Catholic Church at 440 East Washington Street in Howell is offering drive-thru food pick up on Saturdays from 10am to noon. People can remain in their vehicles and the food will be loaded for them. Food Pantry Coordinator Paul Garrison tells WHMI they’re still open every Saturday as they have been for the last 20 years but are just now doing drive-thru service only. He says food bags are all pre-made and stocked as full as possible with produce, baked goods, meats, and other items. Garrison noted the line isn’t usually that long so each car typically spends between 3 and 5 minutes in line. He says they do have some walk-ups from, the surrounding residential neighborhood and they’ll put them through the front of the line.

The general rule is people must be residents of Livingston County and Garrison says people have been coming from far and wide. He says they’ve been averaging about 100 families every week but a lot are multiple families. He says some come single but most are double or more so when you add it all up, that’s sometimes between 250-350 people their feeding on a regular basis so they try to make sure they have enough for everybody. Garrison says it is a little bit challenging right now but people are stepping up and they’ve had some wonderful donations.

Garrison says they’ll provide the pantry service as long as they can and stressed they’re taking every precaution they can to make sure their workers stay safe. He says they ask that people stay in cars, keep their windows closed and observe all of the separation processes in place. Garrison added they’re keeping rules pretty strict and limiting contact so everyone stays healthy and can continue to get food. If anyone would like to donate, Garrison says there is a drop box at the church. He says they’re also accepting things such as canned goods, cake mixes, hot dog buns, and condiments like ketchup and mustard.