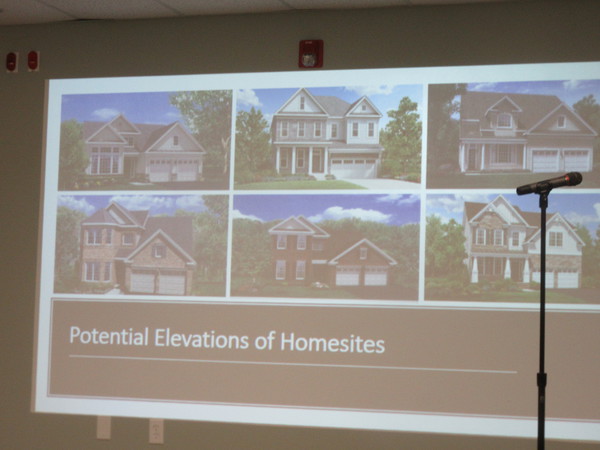 Developers of the Bluffs at Spring Hill off Flint Road, next to I-96, were at the Brighton Planning Commission meeting Monday night to present their proposal for 72 site condominiums. Site condos are single-family homes in which the land is held in common by an association of home owners in the development. The development would be situated on 31 acres starting at the end of Spring Mountain Drive, where there is an existing site condo development.

Several people in the audience addressed commissioners about the proposed project. One woman said the development would not be good for a number of reasons, among them the fate of a forest full of stately mature trees. However, Steven Schafer, owner of Schafer Development in Farmington Hills, said that they would be able to save 40% of the trees by building the homes closer together, thus creating more undeveloped open space.

The woman also voiced concerns about the density of the development , stated that it lacked sufficient buffer zones and would have “a negative economic impact” on the existing homes in the area. The homes would range from 1,600 square feet to 2,800 square feet in size and priced from the upper $300,000 range to the lower $400,000 range. Site condos in that price range are said to be attractive to both empty-nesters and college-educated professionals.

Some residents wanted bigger sound barriers and others said that the development would greatly increase traffic in the area. Commission Chair Matthew Smith tells WHMI that a PUD gives the city considerably more leeway in setting standards and conditions that must be met in order for the proposal will be approved.

With preliminary approval of the rezoning from A-1 to Planned Unit Development, the proposal now goes into the negotiations phase with city staff regarding a number of conditions. The proposal will then go back for a public hearing before city planners for final PUD approval, and then on to City Council for final approval or denial. (TT)