Speaker Says Census Is Built On Past Experiences, Current Technology 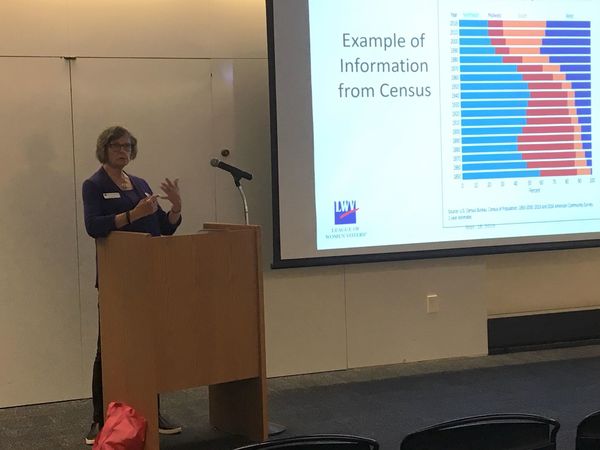 A presentation in Livingston County unpacked the importance of the 2020 census and how it will be a combination of using standards that reflect the past and the present.

The educational session was held Thursday at the Howell Carnegie District Library through the Brighton/Howell unit of the League of Women Voters of the Ann Arbor Area. Guest Speaker Margaret Leary, who is the Librarian Emerita from the Michigan Law School, was the event’s guest speaker and discussed the basics of the census, noting that it technically begins in mid-March, but the official Census Day is April 1st , and will be conducted by the Census Bureau, temps, and volunteers. But Leary says 2020’s census will be unlike any before it as this time around, residents can respond by a paper form in the mail, through their phone or online.

Leary says the 2020 census is built on past experiences but uses current technology and with that, there naturally are questions about cybersecurity. Leary says with the advancement of technology being incorporated into the count, the Census Bureau is taking concerns of cybersecurity seriously. Leary reports that the Bureau will use private sector and federal standards to ensure the data will be safe, adding they will do that by using two-factor authentication and by using data encryption and re-encryption as data moves from one part of the system to the other.

The census form and instructions will be presented in 12 languages, but census-takers will also be able to provide information on how to respond and where to find translations for those that speak outside of those languages. Leary notes that one frequently asked question is how workers are able to account for the homeless population. Leary says workers will collaborate with the area’s community to locate those individuals and will visit tent cities and shelters. The 2020 census runs through June, with counts being due to Congress by December 31st of 2020, and the information due to each state’s Secretary of State by April 1st of 2021.

A major focus of Leary’s presentation was what the information collected from the census is used for, stating that there are at least 50 ways to use it, but mostly that it provides a picture of the nation that helps to determine issues like development, how congressional seats are apportioned, and how federal funding is distributed. Michigan in 2016 received approximately $29.2 billion through 55 federal spending programs guided by data from the 2010 census.

Speaking to an overarching theme of the importance of the census Leary adds, “democracy depends on a complete count”. (DK)