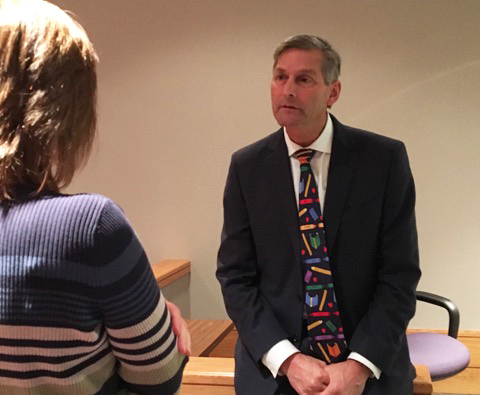 An interim superintendent has been selected for the South Lyon Community Schools district.

Superintendent Melissa Baker in October announced her resignation; leaving the district after 27 years to pursue a new opportunity. Seven individuals contacted the district’s Board of Education to express an interest in the position. Their resumes were reviewed by Search Consultant John Silveri of the Michigan Leadership Institute, who also reviewed a list of people who had submitted their names for consideration to the Michigan Association of Superintendents and Administrators. Lastly, Silveri gave thought to other superintendents in the area who recently retired. Silveri felt ultimately that candidate Dr. George Heitsch would be best suited for the job and made a recommendation stating such to the Board of Education. The Board on Monday voted unanimously to enter into employment agreement negotiations with Heitsch to serve as interim superintendent from January 1st to June 30th.

Dr. Heitsch completed 43 years in education after retiring in June from Farmington Public Schools where he had served as superintendent for five years, and eight years as superintendent in the Avondale School District prior to that. Heitsch’s success in passing bond issues may have contributed to his selection. He is aware that the district is considering placing a bond proposal on the ballot this spring. But he didn’t shy away from the negative, also telling board members at the meeting that he is familiar with issues like declining enrollment and closing schools. Heitsch hopes to use that experience to keep moving forward.

Heitsch says he’s “a little anxious” because he’s been a superintendent before but never an interim superintendent. Still, he has the board’s confidence in his leadership. Treasurer Craig Dashner said he looked at all of the candidates’ resumes but still felt Heitsch had “the most recent experience” adding, “The other candidates, they had good experience but they’ve been out of being a superintendent for awhile or they had smaller schools. He was probably the best fit to be able to come here right now which, in my opinion, made it very easy to support him for what we need.”

Soon-to-be former Superintendent Melissa Baker feels Heitsch will be a solid leader in the district and joked about one of his attributes that students will likely appreciate stating, “You all will be in very good hands with Dr. Heitsch. He is very well-respected not only in Oakland County, but the tri-county and throughout the state. He’s been a mentor to myself…and for our students, he also does a great job of calling snow days.”

As Monday’s meeting was the last for Baker as superintendent, she gave an emotional goodbye, saying that she is blessed to have had the experience. Board members wished her well and expressed how much they’ve enjoyed working with her. Trustee Anthony Abbate says Baker has been a “strong and positive presence in the community”. (DK)