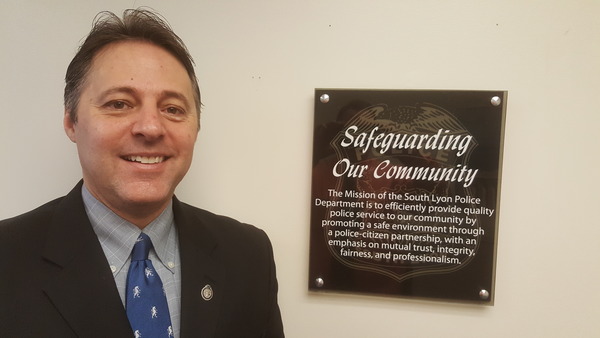 The South Lyon Police Department is announcing some exciting new changes, including a new chief who is no stranger to the community.

Lt. Chris Sovik officially took over on January 29th, which coincided with some other departmental promotions and staff restructuring. Sovik has spent 27 years with the department. He has also been handling a lot of the chief’s duties over the past couple of years in anticipation of taking over so the transition has been pretty seamless. Sovik tells WHMI Collins had a succession plan in place and they’ve kind of been preparing for a couple years for him to take over and he was delegated more of the chief’s responsibilities to make the transition seamless. He says the succession plan really helped everything go a lot smoother – adding it’s a great place to work and a great city. He says they have a great group and thinks the team-concept is really in place – saying they all work well together and get along to deliver the services the public expects and are pretty excited about the opportunity and change.
Sovik noted the department already has a strong relationship with the community and great support from it, referencing the motto “if it’s not broken, don’t fix it”. That being said, he envisions infusing a little bit more into the community to work more with businesses owners and possibly homeowners associations and citizens. Sovik says just to get out a little bit more and interact with them so they get to know the officers and what kind of people they are. Sovik says the people of South Lyon have come to know great service and quick response times and that will continue, adding everyone in the department is very familiar with each other and the way things run so they work great as a team. Sovik noted that having been delegated the chief’s responsibilities over the last couple years really set things in motion for him to take over during a seamless transition. He acknowledged that he has a little bit different style from Chief Collins but doesn’t anticipate any issues.

As for departmental changes; Doug Baaki moved up to the position. He was a sergeant for 19 years before being promoted a couple weeks ago. Taking the new sergeants position is Mike Wittrock, who has been an officer for 17 years. After Detective Brooks retired in October, the department hired its first new officer after 15 years and Officer Schneemann is said to be fitting in very nicely. Sovik and the others mentioned will be formally recognized for their promotions at the South Lyon City Council meeting on Monday night. It starts at 7:30pm at City Hall. (JM)