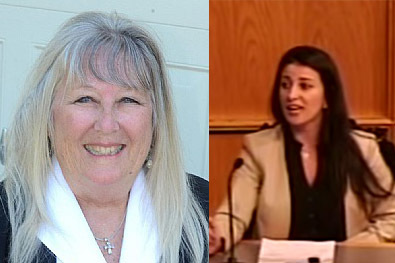 Despite the efforts of a South Lyon Councilwoman, there will be no perjury charges filed against her colleague.

Councilwoman Maggie Kurtzweil (left) had alleged that fellow South Lyon City Council member Mary Parisien (right) had committed perjury during testimony in front of an Oakland County judge. Parisien sought, and obtained, a Personal Protection Order against Councilman Carl Richards after learning he had been bragging about peeping into the windows of her home, describing the interior in detail, and then speculating on her sexuality.

Parisien incorrectly told the judge that the Oakland County Sheriff’s Office was investigating the incident. Kurtzweil, a political ally of Richards, said that constituted perjury and requested charges be filed against Parisien. In response, Oakland County Sheriff's Sgt. Christopher Giolitti informed Kurtzweil that while the sheriff's office was not conducting an investigation of Richards, Parisien had been misinformed that was the case by an investigator assigned to the Oakland County Prosecutor's Office. Accordingly, no charges would be forthcoming.

Parisien told the South Lyon Herald that Kurtzweil’s continued defense of Richards’ (quote) “lewd and vulgar behavior…speaks volumes about Margaret's character..." Kurtzweil contends that as an attorney, Parisien should have “done her due diligence” before testifying under oath.

Richards, meanwhile, has been found in violation of South Lyon’s ethics ordinance because of his actions in regards to Parisien. The city’s Board of Ethics plans to meet next month and make a determination of what, if any, sanctions he should face. (JK)