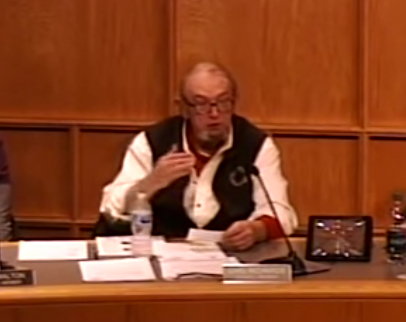 The Board of Ethics for the City of South Lyon has determined that a city councilman has violated the municipality’s ethics ordinance by making inappropriate comments about another council member.

The city’s Board of Ethics, which was established last month, met at South Lyon City Hall Tuesday night to discuss inappropriate behavior that was committed against City Councilwoman Mary Parisien by Councilman Carl Richards. Parisien was contacted by a local business in October and was told that the 72-year-old Richards had been there bragging about looking into the windows of her home before describing the interior in detail. Richards is also said to have made comments about Parisien’s person, her body and her sexuality, insinuating she was a "topless dancer at a gay bar."

An Oakland County judge granted Parisien a Personal Protection Order, or PPO, as a result; however the incident was still referred to the city’s Board of Ethics to determine if Richards violated the ethics ordinance and whether that warranted punishment. Prior to discussion Tuesday, Parisien implored the board to “look at the facts” and Richards’ admission to being on her property. Parisien says there are people who are trying to discredit her and that those people are victim-shamers with their own personal agenda who do not respect women and are not representing the community.

The three-member board all agreed that Richards did violate the ethics ordinance, citing components of the ordinance that call for council members to have qualities of integrity, including “high standards of morality”. Board of Ethics Chair Dan Beagle noted among those were principles that called council members to “safeguard public confidence” by being “honest, fair and respectful”.

After agreeing that Richards did violate the ethics ordinance, the board decided to work on drafting a report of their findings, what supported their conclusion and what action they recommend should be taken against Richards, if any. The board plans to meet again on February 5th. (DK)