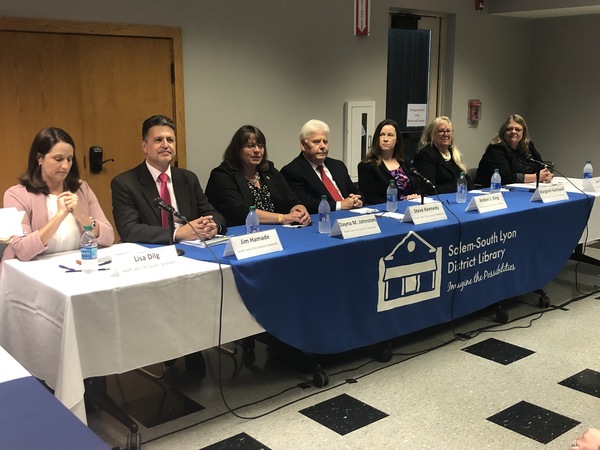 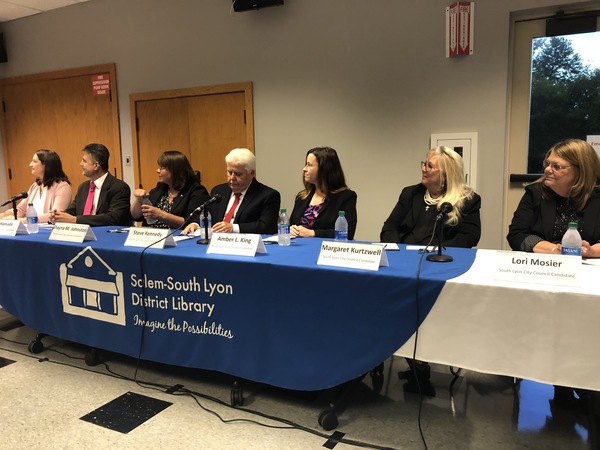 On November 5th, City of South Lyon Residents will select 3 city council members to serve 4-year terms. The septet of candidates vying for those seats met at the Salem-South Lyon District Library for the forum hosted by the League of Women Voters. Two incumbents, Maggie Kurtzweil, and Steve Kennedy, were joined by 5 others including Lisa Dilg, Jim Hamade, Dayna Johnston, Amber King, and Lori Mosier. Following opening statements, the candidates answered 3 questions which they were given in advance to prepare for. After that, questions from the roughly 50 in attendance were posed. When asked why she wanted to be a part of city council, Kurtzweil said it was for the same reasons she wanted to when she first ran in 2015; developing the downtown area.

With recent, public strife between some current council members, they also shared how they would respond to residents who have seen the South Lyon community in the news for reasons no one wants to be. When asked about how they see the role of a City Councilmember, Lisa Dilg said they need to advocate for both residents and businesses; being a champion for the city.

When asked about the 3 biggest expenditures they saw facing the city, Kennedy said he believes roads and infrastructure are the most important. Roads, water, and wastewater infrastructure were popular targets for the candidates, along with dealing with the city’s unfunded pension liability.

One resident asked about their feelings on annexing land from neighboring Lyon Township. While this was an unpopular opinion among most candidates, Amber King was open to the consideration, pointing out the difficulties that arise from having an oddly shaped city where people think they are a part of it, but sometimes aren’t.


Full replays of the forum will be available on YouTube, the library’s website, and on South Lyon Cable Access 19. The two mayoral candidates get their chance to answer questions in a forum held tomorrow night at 7pm, at the library. (MK)