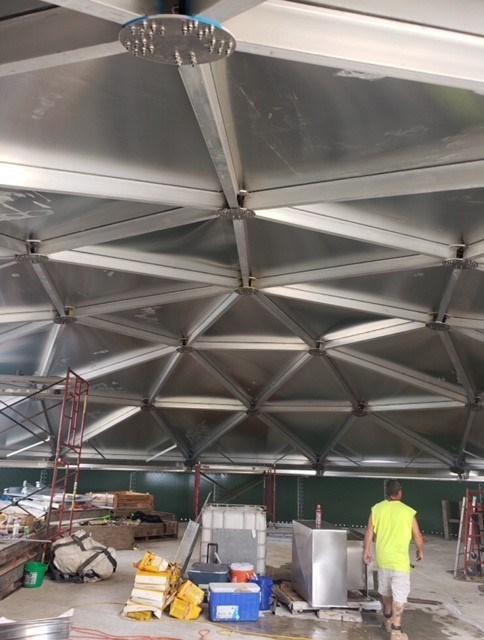 Lyon Township officials say a project to improve the municipality’s water system is moving along, and more than halfway complete.

At a meeting of the Board of Trustees Tuesday, Public Works Director Bob Martin provided an update regarding the project, which includes the construction of two water treatment plants; the Woodwind Treatment Plant located on Ten Mile Road and the other at 9 Mile and Griswold Roads, known as the South Hill plant. Construction of the South Hill plant is approximately 60 to 65% complete as the water tower is still under construction.

According to the township’s September newsletter, the water tank is being assembled atop the base, while the domed roof is lifted as each new level of the tank is added. When completed, the tank will hold 1 million gallons of additional, filtered capacity to the water system. Martin says that will help even out water pressure throughout the community. He guesses that component of the project will be ready for next spring but notes that timeline is tentative because weather is a delicate issue when workers are 200 feet in the air.

The goal of the improvement project as a whole is to provide clean and iron-free water. Martin tells WHMI that there was recently a very small glitch in the system that caused discoloration, but does not expect it will happen again. He adds the water was never in jeopardy of being unsafe or harmful, but was aesthetically unpleasing due to discoloration. He says officials worked very hard to get the filters back to the appropriate level to return the water to its crystal-clear state, and that’s where they hope to keep it at all times.

Martin says the township and department of public works believes their relationship with the public and having residents’ “stamp of approval” is important as the agencies are treating and delivering a product to families that is consumed by people of all ages. He says even if the municipality has met state criteria, the community’s faith in the system is just as valuable. (DK)


Photo courtesy of Artesian of Pioneer.