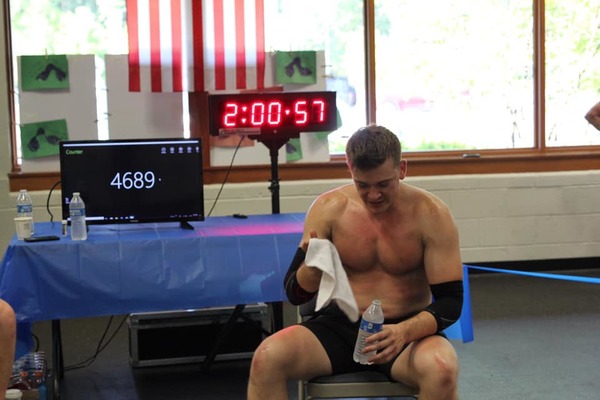 A weekend fundraising challenge in Milford over the weekend has an Army Soldier from Michigan hoping he’ll be listed in the Guinness Book of World Records.

Bryan Abell and his supporters say he broke the world record for most chest-to-ground burpees in 12 hours as he raised money and awareness for active and retired soldiers and their families. A burpee is an exercise that requires a person to start from a standing position, go to a squat, kick your legs out, take your chest to the ground, push up and then return to a standing position. The 23-year-old Abell completed 4,689 burpees while making the attempt on Sunday at Carl’s Family YMCA in Milford. In doing so, he raised $1,300 for the Stronger Warrior Foundation, a nonprofit he founded with his sister Katelyn that says its mission is to, “Keep active, retired, and the families of United States service members strong financially, mentally, and physically.”

The Guinness website has yet to officially recognized the feat, but during the live stream on Abell’s Facebook page of the attempt, it appeared that the results were being certified. (JK)