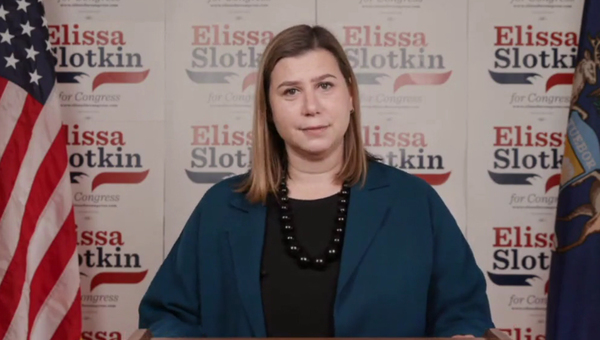 
After a tight race through the early morning hours, Incumbent Democrat Elissa Slotkin has won re-election to Congress.

The battle between Slotkin and Republican-challenger Paul Junge had been close through the morning with Junge holding a 9,000 vote lead at one point as results trickled in from clerks around Livingston, Ingham, and north Oakland counties. But then results came in from Ingham County, where she won by 52,000 votes to put her over the top. With 100% of the precincts reporting, Slotkin won 51.1% to 47.1%, a similar margin to her 2018 victory.

Speaking online to supporters this afternoon, Slotkin said the time now was to try and find common ground not just on those things that can be jointly supported, but also those issues that should be roundly condemned. "We will all have to do something very hard, which is to keep the door open for one another to find love in our hearts for our fellow man. That does not mean we should ignore or remain silent in the face of troubling extremists or even violent currents that have emerged in our last few months. We cannot and we will not accept attempts to undermine our democracy using violence and intimidation. We can't ignore threats to security that are increasingly linked to white supremacy and anti-government extremism. Whatever the ideology behind it, the only acceptable response to violent threats is to condemns them and to oppose the people responsible."

Slotkin’s narrow victory came despite a massive money advantage. She raised approximately $8.5 million for her reelection bid, while Junge raised $1.9 million in his bid to return the seat to GOP control.

The race between Slotkin, a former CIA analyst from Holly and Junge, a former TV anchor and prosecutor from Brighton, was viewed as a key test of whether Democrats can compete in suburbs where Donald Trump won in 2016. She acknowledged that Trump again won the 8th District and cited her victory as proof that she had been able to reach across the aisle for support.

When Slotkin won by less than four percentage points over Republican Mike Bishop in 2018, she became the first Democrat to represent the district since 2000.