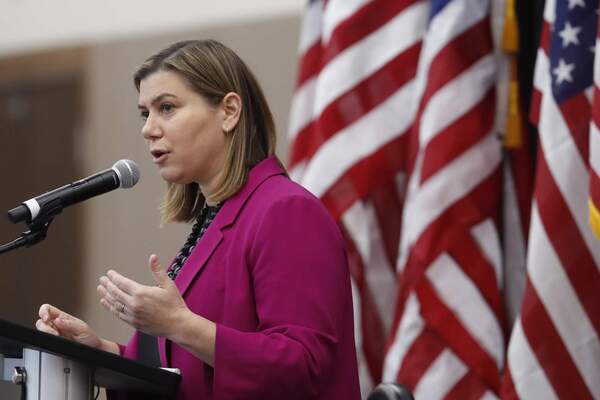 
A sharply divided House has approved the Democrats’ sweeping social and environment bill, providing a big victory for President Joe Biden, with Livingston County’s voice in Congress calling it the “biggest investment in American families and kids this country has seen in half a century.”

8th District Democrat Elissa Slotkin released a statement this morning following passage of the bill, which was solidly opposed by House Republicans. In it, Slotkin said that while the bill was “not perfect” and contained items she would have preferred to be taken out, she believes the Senate will now “slim down” the measure, adding that “coming from the national security world and years of international negotiations, I know that no one ever gets everything they want.”

She singled out the issue of immigration as one of the measures she disagreed with, saying it had not been handled in a comprehensive manner, “and does not get at the root causes of our broken immigration system, nor the enduring problems at the southern border.” However, she hoped to work with colleagues on both sides of the aisle to try and address that issue “in the comprehensive way it deserves.”

Democrats prevailed after the party's progressives and moderates ended months of disputes over its size and scope. Slotkin was among the moderates who insisted the infrastructure bill be passed first and stated concerns over the cost of the “Build Back Better” legislation. The measure would bolster child care assistance, create free preschool, curb seniors’ prescription drug costs and combat climate change.

Slotkin said that by "capping what middle class families spend on child care at 7% of their annual income, this bill recognizes childcare for what it is: a family issue, a kids issue, a women’s issue and, most directly, an economic issue. In addition, this bill will provide every child in the country – no matter their zip code – with access to pre-kindergarten."

Passage came after new cost estimates from the nonpartisan Congressional Budget Office said the legislation would cause federal deficits to grow by $160 billion over the coming decade. However, in her statement today, Slotkin said that she and her team “dug into the details of this package, reviewing the handful of independent cost assessments” and that based on the full range available, she was “confident this package will be paid for over the life of this bill, and the significant changes it will bring to the daily lives of so many Michiganders are worth it.”

The final vote was 220-213, with Michigan's seven Democrats in the House all backing the measure. The state’s seven Republicans in Congress voted no, with many saying it contained excessive and "reckless" spending that would worsen the nation’s inflation issues. Republican Tim Wallberg of Tipton tweeted called it a “budget-busting boondoggle (that) will only worsen inflation and saddle our country with greater debt."

The legislation now moves to the Senate, where moderates like West Virginia Democratic Sen. Joe Manchin are poised to curtail the bill further.

Today, I voted for the Build Back Better Act. I laid out my criteria from the start: it needed to be transformative, targeted & paid for without taxing the middle class. It’s not perfect — but it will make daily life better & more affordable for Michigan families. My statement: pic.twitter.com/HTtqyE7E92

CBO confirms: The Democrats’ math doesn’t add up. Their massive tax and spending spree is NOT fully paid for. This budget-busting boondoggle will only worsen inflation and saddle our country with greater debt.