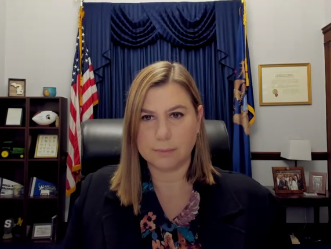 
A bi-partisan bill led by Livingston County’s congresswoman to expedite security assistance to Ukraine is expected to be signed into law soon.

The U.S. House of Representatives recently overwhelmingly passed the Ukraine Democracy Defense Lend-Lease Act - a bill led by 8th District Democrat Elissa Slotkin. It had already been passed in the Senate and aims to cut through red-tape and speed the delivery of weapons, munitions and other military equipment to Ukraine as Russia’s invasion rages on.

Slotkin said “Throughout this crisis, Congress has been pressing the Biden administration to ramp up its delivery of weapons to Ukraine and to quickly backfill NATO countries donating to Ukrainians. This legislation, which is now on its way to the president’s desk, helps clear the way to do just that.”

A press release states that once signed into law, the legislation will authorize the President to lend or lease military equipment to the Government of Ukraine to bolster its defensive capabilities for FY 2022 and 2023; streamline the processes to provide defense equipment and material support to Ukraine; and require the administration develop procedures to expedite the delivery of equipment to Ukraine to support its defenders.

Slotkin, a former CIA officer and top Pentagon official, has led additional bi-partisan legislation to address Putin’s war against Ukraine, including the DICTATOR Act, to investigate whether China is helping Russia evade U.S. sanctions; as well as the American Energy for Europe Act, which would leverage American manufacturing to help wean European allies off Russian energy resources.

The Ukraine Democracy Defense Lend-Lease Act is expected to be signed into law within the next week.

The press release is attached.