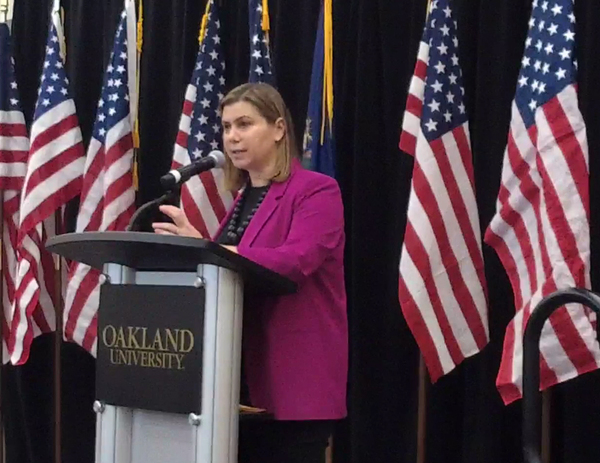 In an Op-Ed in Monday’s Detroit Free Press, the 8th District Democrat says she made up her mind over the weekend after reviewing the evidence that was presented during the recent hearings held by the House Intelligence and Judiciary committees. The Judiciary Committee last week voted along party lines to send two Articles of Impeachment to the full House, which will vote on them this week, also expected to be completely down party lines. The announcement came just hours before a town hall Monday morning at Oakland University in Rochester, where Slotkin (pictured) was greeted by a loud mix of both supporters and detractors among the nearly 500 people in attendance. Straining to be heard over protestors, Slotkin tried to explain why she came to the conclusion that she did. "The role of Impeachment was put into the Constitution by the Founding Fathers. I didn't invent it. Our Founding Fathers put it there and they put it there so that no one would be above the law."

Slotkin, who served in the CIA, said she used those skills over the past few days to look over all of the relevant materials, including the articles of impeachment from the Nixon and Clinton presidencies as well as the original documents that “outlined and explained impeachment as a tool: the Constitution, the Federalist Papers, and the book of “House Practice,” the official guide to the rules, precedents, and procedures of the House that every new Member of Congress is issued.” After doing so, Slotkin says she will vote yes on both articles. On the abuse of power resolution, she says it is her belief “that the President illegally solicited the help of foreigners to influence the American political process”, pointing to the September 19th live TV appearance of the President’s lawyer, Rudy Giuliani, in which he said he had encouraged Ukraine to investigate the Bidens. She also says the September 22nd response by President Trump to a reporter’s question, “affirmed it”, noting that he later went on to encourage China to “investigate” Biden, “doubling down on it when asked by reporters.” She says those first-person statements, along with the variety of “first- and second-hand accounts provided in sworn testimony, paint a clear picture of a president abusing the power of his office for personal political gain” Slotkin says that as a former CIA officer, she believes those actions, “lies at the very heart of impeachable conduct.”

On the obstruction of Congress resolution, Slotkin says “President Trump sent out unprecedented guidance to refuse and ignore the requests and subpoenas of the inquiry. He did this even though the Constitution gives the House of Representatives the “sole power of impeachment.” While the President may not have liked the inquiry, he broke with 100 years of tradition by ignoring the subpoenas, and in doing so, obstructed Congress’ authorities.”

Slotkin ended by saying that she’s been told numerous times if she voted for impeachment it would end her “short political career” but she says there are, “some decisions in life that have to be made based on what you know in your bones is right. And this is one of those times.”

Slotkin's decision plays directly into the Republican talking points of those who have already announced their intentions to seek the GOP nomination to run against her next November. They include Howell real estate agent Mike Detmer, East Lansing Attorney Kristina Lyke, former news anchor Paul Junge, and Michigan Board of Education member Nikki Snyder of Dexter. All have mentioned Slotkin's support of an impeachment inquiry as one of the reasons they decided to run. Junge issued a statement Monday morning on Slotkin's decision, saying, "it’s no surprise she supports impeaching and removing President Trump from office" calling her a "shameless soldier for Nancy Pelosi and the radical liberals in Washington DC" saying that, "Congresswoman Slotkin votes 90% of the time with the radical liberal squad of Congresswomen Rashida Tlaib, Ilhan Omar, and Alexandria Ocasio-Cortez. Michigan voters deserve better."

Slotkin was able to flip the nominally-conservative 8th District in 2018 with a narrow win over incumbent Congressman Mike Bishop, 51-47%, becoming the first Democrat to hold the seat since 2000. She did that largely by appealing to moderates and playing up her national security and defense experience. But as a whole, the 8th District went for Trump in 2016 by a 50.6% to 43.9% margin over Democrat Hillary Clinton. (JK)