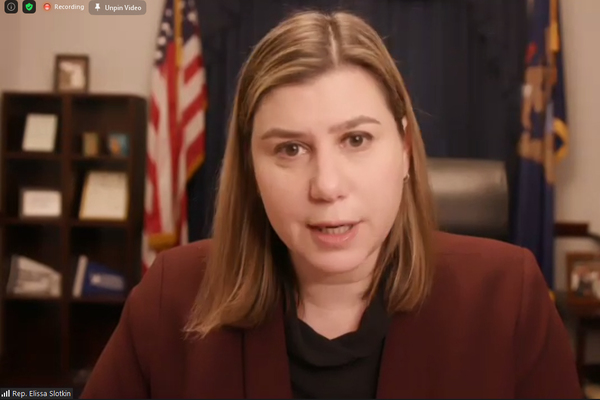 
With threats of domestic terrorism on the rise, Congresswoman Elissa Slotkin held her first press conference Thursday as chair of a subcommittee that will take on the challenge of ending it.

This week, the 8th District Democrat from Holly was named Chair of the Intelligence & Counterterrorism Subcommittee of the House Committee on Homeland Security. The Congresswoman has deep experience working in national security within the CIA and Pentagon, largely fighting foreign threats. Though there have been growing signs, locally, she said it was the events in Washington on January 6th that led her to believe the greatest threat to the country is now the division between its people, domestically.

Slotkin told reporters that Michigan and the 8th District have seen the rise of extremism in recent memory, pointing to armed protestors entering the capital in Lansing last April, a kidnapping plot against the governor, and the growth of groups like the Proud Boys in the community.

While some arrests may be warranted, Slotkin believes that domestic terrorism isn’t a problem you can "arrest your way out of." She sees outreach and education as key components to making sure people are critical thinkers, and not those inspired by propaganda resorting to violence. Slotkin said it needs to be a public conversation, understanding that there is misinformation out there and that many people are feeling grievance from recent events and thinking they are doing the right thing.

Slotkin cautioned people not to underestimate groups in Michigan, especially those that position themselves as being pro-law enforcement. “If a crowd bludgeons a man to death with a fire extinguisher, they are not pro-law enforcement. If they come into a building and destroy it and leave, like, I think 100 of them wounded with head trauma and stabbing and using a hockey stick- that is not in support of law enforcement. It’s the very opposite.” U.S. Capitol Police Officer Brian D. Sicknick was killed on January 6th by the rioters, reportedly after being bludgeoned with a fire extinguisher.

She pointed out several areas the committee is going to work on. The first thing she feels they need to do is establish a shared vocabulary so that people know what it means to be a domestic terrorist versus an extremist or a conspiracy theorist. For her, the key is if someone is willing to use or incite violence for political gain. She said they need to fully understand the depth of the threat and that domestic terrorism needs to be a "whole-of-government priority."

Another proposal she wants the subcommittee to examine is mandatory Holocaust education. Slotkin, who is Jewish, said that currently only about 15 states require it in their curriculum and the federal government might want to leverage school funds to make it mandatory in some form or another.

She recalled walking to the Capitol on January 6th during the rally held by supporters of former President Trump, many of whom later attacked the Capitol building in an attempted insurrection. “When you see something like a ‘Camp Auschwitz’ sweatshirt or a swastika or some of these tropes that have been around forever about wealthy Jews running the world, that kind of thing — if you don’t know that as a historical legacy and connection to genocide, when you see it at a random protest you might not think it’s that big of a deal."

Slotkin also wants to hold social media platforms accountable, feeling their leaders do not recognize their responsibility for public safety. She also called for a discussion of civil rights and liberties. She pointed out there are people on both sides who want to make sure that what they do next doesn’t infringe on their rights. The subcommittee will also question if there should be greater domestic terrorism laws, perhaps akin to Patriot Act laws that don’t extend into the domestic realm.

Slotkin said that co-chairing the subcommittee with a Republican will give them the opportunity to show the country what it can look like for Democrats and Republicans to parse through a really difficult issue without being vitriolic, spiteful, or hateful. She said she knows there will be disagreements along the way because this is about people’s safety and civil liberties, but she will do her best to show that they can have these tough conversations and get things done.