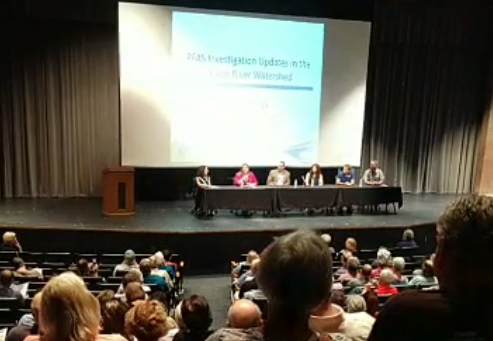 A forum was held Monday evening on a problem that has just recently gained national attention - chemical compounds that have entered many rivers, lakes and groundwater– and from there into wastewater treatment plants and well systems.

Those attending the forum on PFAS - the acronym for a chemical compound that likely has a long-term, adverse effect on humans - were told that work is being done to develop a set of standards for regulating the problem in lakes, rivers and streams. PFAS is a group of chemicals that been used for decades in industrial applications, as well as consumer products such as carpeting, waterproof clothing, upholstery, food paper wrappings, fire-fighting foams, and metal plating.

The forum which took place at the Jane Tasch Performing Arts Center outside Pinckney, was arranged by 8th District Rep. Elissa Slotkin. The congresswoman, who is on a Task Force which has produced legislation on the PFAS problem, says steps need to be taken to address the issue. The near-capacity group in attendance appeared largely satisfied with the responses given to them by the experts. Present were representatives from the DEQ, now called The Michigan Dept. of Environment, Great Lakes and Energy (EGLE), plus from the Livingston County Health Dept. and the Huron River Watershed Council.

The audience was told that the state, which wants to be the national leader in responding to the PFAS issue, will continue to work on setting safe drinking water standards for PFAS which are expected to be ready for implementation this fall. (TT)