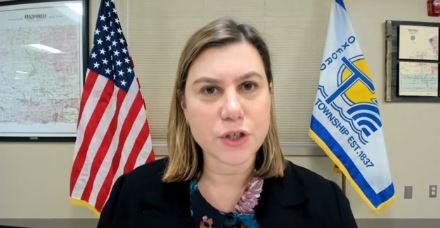 
8th District Congresswoman Elissa Slotkin discussed the tragic events and takeaways from the tragedy in Oxford during an online town hall.

The Holly Democrat held the meeting, online, from Oxford, Thursday afternoon. She sympathized for the close-knit community that she said had its heart ripped out in less than 5 minutes' time, with uncertainties that things could ever be the same again. 15-year old Ethan Crumbley has been charged for murder, terrorism, and more for the alleged killing of 4 Oxford High School students and injuring of 8 others, last week.

Slotkin said that the victims were exceptional young people as she has gotten to know them through their families and school staff over the past week. She said the consistent thing she has heard is that they were all fun, loving, exuberant young people.

She spoke to the senseless loss of children and how everyone is trying to process what happened and where we go from here. Slotkin praised first responders for not hesitating to go into the building, which she said has not always been the case in these types of events.

Slotkin said that as she continues to reflect on kids killing kids, she says she’s come to the conclusion we can be doing so much more. She said we need to make sure we are keeping them safe and setting an example. As for setting that example, the Congresswoman said that that type of leadership is set at the top. Slotkin called on adults to be a better example, as threats of violence, online or not, become more common, casual, and normal. She asked how kids are supposed to rationalize lessons we all learn in kindergarten about treating people the way we want to be treated if they see adults acting the opposite.

Slotkin was encouraged that the alleged shooter’s parents were being charged for not being responsible gun owners and believes Michigan could be setting an early precedent by doing so. She said there are millions of responsible gun owners in Michigan and she, herself, grew up in a gun family. Still, she said she believes that if you are going to own a gun and have children in the home, you should be responsible for storing it safely and taking basic steps to ensure it doesn’t end up in the hands of a child, dangerous person, or criminal. Slotkin said that adults should be held accountable for how their guns are handled.

The Congresswoman said this tragedy has also exposed all the holes in mental health services available for young people. She said that when children are using violence, contemplating suicide, or generally struggling more than at any other time in history, we have to acknowledge that and provide resources to meet the demand. Slotkin said many schools might have 1,800 students, but only one social counselor, and that isn’t enough.

In talking with hospitals and law enforcement, Slotkin said they are getting more and more calls for help, but have nowhere to put the people. To her understanding, there was more a robust mental health structure 20 years ago, and what we have now is not sustainable.