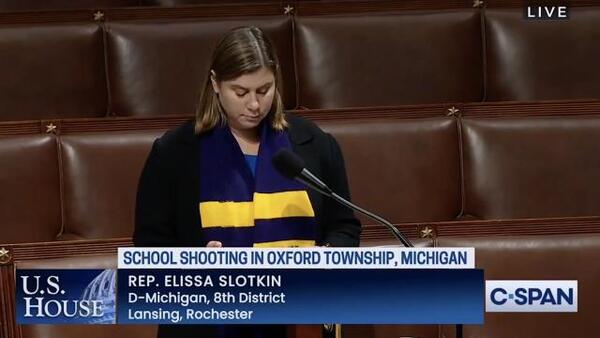 In the aftermath of Tuesday’s school shooting at Oxford High School, Congresswoman Elissa Slotkin delivered remarks on the floor of the House of Representatives Thursday night honoring the four students who were killed.

Slotkin also took time to thank all of the teachers and first responders who put their lives on the line that day as well as the medical professionals who worked to save the injured.

"What you did saved children and teachers and administrators," said Slotkin. "You save someone's child, someone's brother, someone's mom. You kept people on this Earth for their families to cherish and hold close and every one of them will remember that day and the role you played."

Earlier in the night, Slotkin led a moment of silence on the House floor alongside the bipartisan members of Michigan’s congressional delegation to pay tribute to the lives lost on Tuesday.