Slotkin Holds "Across The 8th" Event In Pinckney 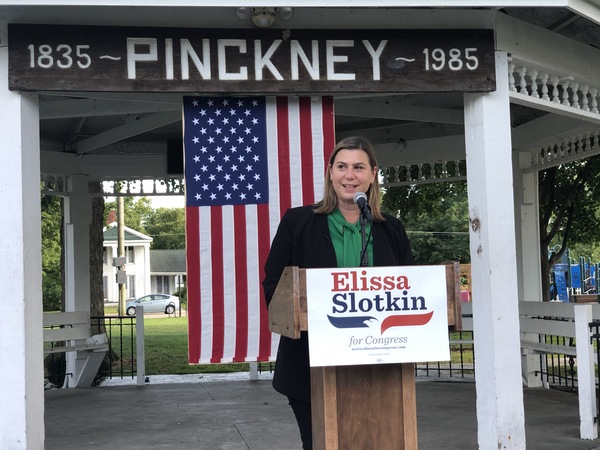 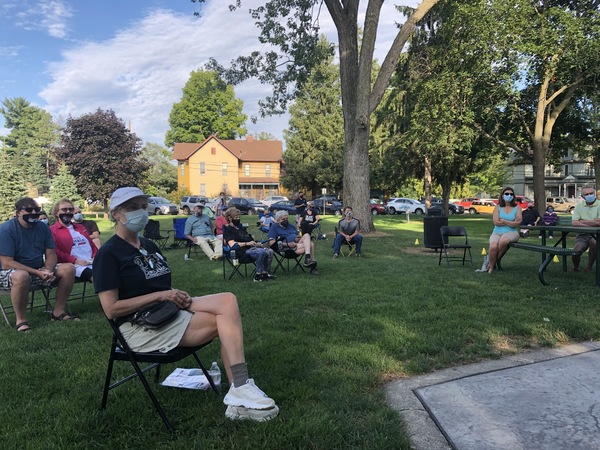 
Congresswoman Elissa Slotkin presented her resume for re-election and took questions from constituents at an event in Pinckney, last night.

The Holly Democrat continued her “August in the 8th” Tour in front of roughly 50 people and viewers on Facebook from the gazebo at the Putnam Township Square Park. Pinckney Village Trustee Rebecca Foster introduced Slotkin, saying she felt that Slotkin’s willingness to connect over her 2 years in office is a hallmark of a candidate who cares. Slotkin opened up talking about her past couple days in Livingston County when she met with local manufacturers, businesses, and schools.

She said her first-term priorities in Congress were to lower the cost of prescription drugs and health insurance, and that remains unchanged. The Representative said she continues to play defense on attacks to take away coverage from people with pre-existing conditions.

Slotkin also pointed to ground being made on clean water in Michigan, saying environmental security should be treated as Homeland Security. Slotkin said that she believes that bi-partisanship is in her bones, and pointed to her efforts in advancing legislation to better protect residents and waterways from PFAS as proof. She said, “In addition to the 9 provisions we turned into law we ‘ve introduced another 22 in the House. Those are all bi-partisan. I am a believer that in divided government the only way to get things done is to work across the aisle. While we have major differences on major issues, it is my job to find those areas of overlap to improve the lives of my constituents, their pocketbooks, and their kids. That is my job, to find those areas of common interest. And it’s not always easy, but it is the job.”

Slotkin also pointed towards her efforts at helping secure PPE and how she was willing to get creative and work with sources many wouldn’t think of, like Chinese restaurants and an adult store, to help secure hundreds of thousands of masks to local hospitals.

When asked about the difficulties of getting broadband and quality internet to rural areas, Slotkin said it is a major problem. She called it a barrier for education, and suggested that it should be treated as a public utility. The Congresswoman added that she thinks this is something that will be talked about more once we’re out of the pandemic.

The Congresswoman talked about the issues with the U.S. Postal Service and said that the requirement from a 2006 bill that they pre-pay employee pensions and health care is an “almost impossible hurdle” to overcome. While reversals to recent policies that have resulted in disrupted mail service to many have been suspended, she said that doesn’t solve the problem of making them solvent. She is not in support of privatizing the post office, and is expected to be in Washington D.C. this weekend to sign a bill that would bring the post office financial relief.

One attendee asked about voter suppression and what we’re doing about it. Slotkin said people shouldn’t have to choose between their health and voting. She encouraged people to be spokespeople for absentee voting and to help those that are unaware of it. With a great increase in absentee ballots and problems with the post office, though, she said October 20th should be the last date a voter should put their ballot back in the mail to expect it to arrive on time and be counted. After October 20th, she suggested delivering it yourself to the clerk’s office or using an appropriate drop box.

Slotkin asked constituents to consider the way she works as an advantage, or at least a positive. She said she understands what it means to be from a swing family in a swing district in a swing state, and that she values the independently minded people of the district, considering herself to be one, too.

Voters will decide whether or not to elect her to a second term this November when she faces Republican Paul Junge in the general election. Junge has questioned Slotkin’s bi-partisan stance, stating that she has voted the same as House Speaker Nancy Pelosi 96% of the time. When asked about this, Slotkin told WHMI, “That’s a standard talking point people are using. I think my record speaks for itself. I passed 9 bills into law, they’re all bi-partisan. I introduced another 22 into the House, they’re all bi-partisan. It’s in my bones. While I think it would be easier if Mr. Junge was running against… Ms. Pelosi, he’s not. He’s running against Elissa Slotkin. All I can bring to it is my record and the spirit with which I work. I have some Republican colleagues who vote with her 70% of the time. I am a Democrat; I disagree with her on some key issues, and I agree with her on other issues. That’s how I approach the job. I take every issue on itself and I don’t just accept something because it’s the party line and I believe my voting record reflects that.”