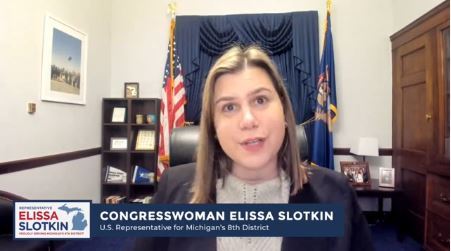 “Accountability” was the word the Holly Democrat kept coming back to as she explained her thoughts on what repercussions should come from last week’s attack on the Capitol. During her town hall event, Slotkin said she believes those events meet the definitions of “violent insurrection” and “terrorism,” and that President Donald Trump incited it. Slotkin said during the town hall, “The attack was not just against us in Congress, but our Constitution and constitutional processes and our democracy itself. For me, as someone who has taken the oath to protect and defend the constitution over and over in my life in the CIA, in my life at the Pentagon, and now in my life as a congresswoman, this really struck me to my core. And I believe the President has violated that same oath to preserve protect and defend the Constitution of the United States."

Tuesday night, the House voted on legislation urging Vice President Mike Pence and the Cabinet to invoke the 25th Amendment and remove the President from office. Slotkin said as it is unlikely that Pence will act on that, they are prepared to vote on impeachment Wednesday. When asked why they would take that route and just not vote to impeach, Slotkin said that using the 25th Amendment is the fastest way.

While the first impeachment of Trump last year brought no Republican votes in the House, a small but significant number of leaders and other lawmakers are breaking with the party to join Democrats on Wednesday. At least five Republican lawmakers, including third-ranking House GOP leader Liz Cheney of Wyoming, announced they would vote to impeach Trump, cleaving the Republican leadership, and the party itself. Trump, who would become the only U.S. president twice impeached, faces a single charge of “incitement of insurrection.”

Though she said it is unclear what the U.S. Senate will do with their end of a potential impeachment trial, Slotkin said she cannot ignore that idea, with such a visual of the capital attack in her memory. She stated, “I don’t believe we can get beyond this point without some accountability. I personally think, although the timeline couldn’t be worse, it’s important that the House that was attacked use the strongest measure available to them to say ‘no, we don’t accept this in our politics.’”

The Congresswoman also addressed the concern that an impeachment vote will cause more tension, saying they can’t hold back accountability because of fear of the mob. Slotkin said she sees last week’s events as a “generational event” and that the short timeline can’t stop them from their responsibilities to respond. She said future children and grandchildren will look back at last Wednesday’s events in history books and see how we responded to it.

As a national security professional, Slotkin said she how sees the greatest threat to America as being the division among us. She admitted that it is tough having political conversations right now, with both sides feeling they are right and are unwilling to give an inch. Slotkin recommended that if the conversation is too difficult to have with others, then maybe now is not the moment to do in. Seeing part of her responsibility as a Representative to use her position to bring people together, she encouraged both sides to start building back trust with each other by focusing on common issues, like helping save small businesses or other acts good for their local community. By doing so, Slotkin said, you can be put into common, but non-political situations, with people of differing political beliefs. Through that, she believes we can get begin working back to the point of talking about our differences without everyone getting angry.

Meanwhile, in a live interview on WHMI, Slotkin addressed a letter that the Joint Chiefs of Staff sent to American forces on Tuesday, affirming that on January 20, 2021, President-elect Biden will be inaugurated and become the 46th Commander-In-Chief, and that “any act to disrupt the Constitutional process is not only against our traditions, values, and oath; it is against the law.” She called it, "an important recognition of their role in upholding the Constitution as well as the conduct and reputation of the institution they love –– and will be vital throughout this next week of transition from one administration to the next.”