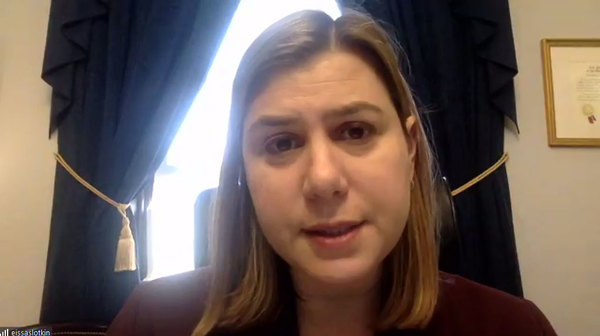 8th District Congresswoman Elissa Slotkin is calling for a single individual to be put in charge of medical supplies for the entire nation. At a video press conference held earlier this afternoon, the Holly Democrat flagged four issues in the personal protective equipment (PPE) shortage crisis that is affecting hospitals and medical centers everywhere.

With help coming from several agencies like FEMA, the Department of Health and Human Services, and the Food and Drug Administration, Slotkin wants to institute a National Medical Supply Czar to oversee the efforts. She said you cannot look across all the issues we are having without one person in charge. She suggested, for example, someone like retired Chairman of the Joint Chiefs of Staff Joe Dunford . She said the Czar needs to be someone who can sit on top of all the agencies, is trusted by the administration, and can also centralize and streamline into a “single picture.” Slotkin said this will help so there are answers that don’t differ when she goes from agency to agency. Not having a Czar, she says, puts Michigan at a disadvantage, “because we can’t possibly see the whole picture if even the federal government can’t.”

Slotkin said that unless all the agencies are coordinated and talking together with the same picture of what we are trying to do and what their role is, then it’s, at best, not going to be efficient, and at worst, these organizations are going to be competing against each other. Other points Slotkin hit on was to get FEMA to centralize the purchasing of supply, and to have the FDA lower strict standards on PPE. She said that some medical equipment is being denied because it might be up to dentist-standards, but not hospital standards, and that supplies from the dental-community is better than no supply. Finally she re-iterated her request of the President to enact provisions he has under the Defense Production Act and centralize, while also guaranteeing, large orders of needed medical equipment from manufacturers.