Slotkin Again Does Not Vote For Pelosi As House Speaker 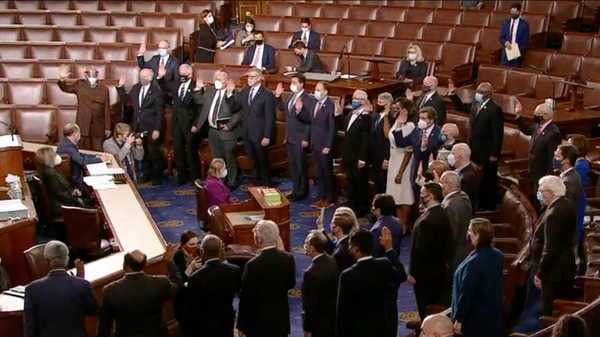 
8th District Democrat Elissa Slotkin was the lone member of Michigan's members of Congress who did not vote for their parties' respective nominees for Speaker of the House on Sunday.

California Democrat Nancy Pelosi won the vote 216-209 over House Minority Leader Kevin McCarthy, also from California. All of Michigan’s Republican congressional members voted for McCarthy, while all of the state’s Democratic members, with the exception of Slotkin, voted for Pelosi. Instead, Slotkin voted “present” during Sunday’s roll call vote, joining two other Democratic members of the House; Reps. Abigail Spanberger of Virginia and Mikie Sherrill of New Jersey.

Slotkin, who also voted “present” two years ago when she first took office, says she already discussed her decision with Pelosi directly and that she wants to see more Midwesterners in leadership positions. In a statement afterward, Slotkin addressed 8th Ditsrict residents, saying that whether or not they voted for her, it was her job to represent them. “It is my responsibility to keep an open mind, to always listen, even if we disagree. To be an independent voice putting what’s best for our community and our country before all else. To be as open, transparent and available as possible. And to fight like hell to pass legislation that actually makes a difference to people's pocketbooks and their kids –– recovering from the COVID-19 crisis, lowering the cost of prescription drugs, bringing manufacturing and jobs back to America, and protecting our national security.”

Slotkin also commented on the release of a recording of a phone call in which President Donald Trump is heard pleading with Georgia’s election chief to overturn Joe Biden's win in the state, suggesting that the official “find” enough votes to hand Trump the victory.

"If the head of state in another country was caught trying to do this, the U.S. would denounce it. We would call it a threat to democracy. It would be an outrage. Because it IS an outrage."

But the release of Trump’s phone call with the GA Sec. of State feels like a final straw.

If the head of state in another country was caught trying to do this, the U.S. would denounce it. We would call it a threat to democracy. It would be an outrage. Because it IS an outrage.

The Associated Press obtained a copy of a recording of Trump’s conversation with Georgia Secretary of State Brad Raffensperger. Trump tells Raffensperger at one point that he wants him to “find” 11,780 votes for Trump. Georgia previously certified that Democratic President-elect Biden won the state by 11,779 votes.