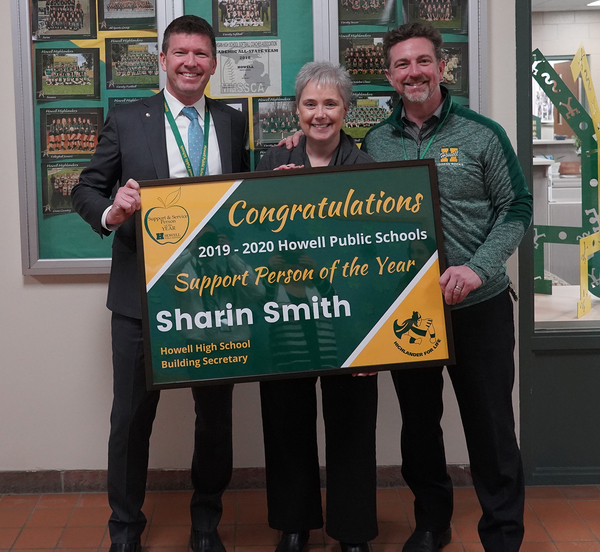 
A woman known for her calm demeanor and a friendly smile has been named Howell Public Schools 2019-2020 Support Person of the Year.

A press release states the high school’s main office is a busy place, yet Smith keeps a calm and friendly demeanor no matter what the situation is, or how many tasks she is juggling at one time. In each nomination that Smith received it was noted that she will always go above and beyond her job requirements to help and support students, parents, and community members. Additionally, the nominations noted that Smith can typically answer any question she is asked, and in the rare instance that she does not know the answer, she will find it and follow-up with the answer. Smith was surprised with the award by Superintendent Erin MacGregor and Principal Jason Schrock. Smith’s daughter was also present for the surprise. Schrock said Sharin's role is a combination of "jack of all trades” as well as "air traffic controller" for the high school. In addition to the day-to-day operations of the school, he says she cares for students and parent needs and communicates with a wide variety of individuals including parents, community members and school staff.

Smith will now represent Howell Public Schools in the Michigan Support Person of the Year competition. The Howell Board of Education will honor Smith at its March meeting. Pictured from left: Superintendent Erin MacGregor, Sharin Smith and Principal Jason Schrock. More information is included in the release.